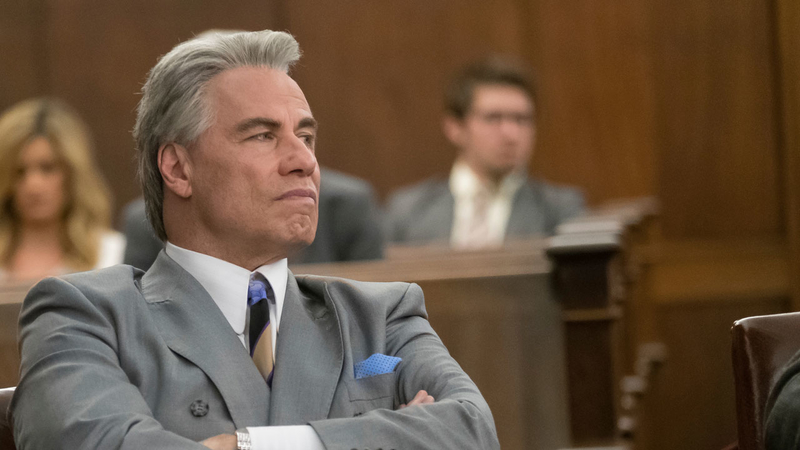 NEW YORK (WABC) -- "Gotti" stars John Travolta as The Dapper Don, who served as the Mafia's boss of bosses in our area during the 1980s.

Travolta's real-life wife Kelly Preston plays opposite him as the mobster's wife, Victoria Gotti, one of many ways fact and fiction blur here.

The project was announced back in 2011, and the movie that arrives after so many long years is a muddled mess.

It's hard to find exactly who is at fault for that: Not Travolta, who is credible enough, and not the source material, which is a mine rich enough for several movies.

As John Gotti says in the film, "This life of ours is a wonderful life if you can get away with it."

So, what went wrong? Perhaps too many chefs were cooking for too long, or maybe the movie went south due to the fact no movie star could ever quite measure up to The Dapper Don who helped to define the times in which he lived in New York City.

Travolta has the swagger down, but clips of the real guy used briefly here show the gangster had a curious mix of magnetism and menace that's very hard to duplicate.

Critics complained the movie glorifies Gotti, who was also known as The Teflon Don for his ability to beat various charges, but his son, who served as technical adviser, disputed that.

"My father spent 10 years in solitary confinement," John Gotti Jr. said. "His last moments were handcuffed to a bed. His death certificate said he choked on his vomit and blood. Glorified? I don't think so."

In "Gotti," the scenes of father and son together are among the most compelling, and if the film had focused more on their bond, it could have been fascinating. The picture instead jumps around in time and offers mere glimpses of a very complex career.

It's quite interesting to watch Travolta act with his real-life wife, but John and Kelly are so well known it makes it that much harder for the viewer to believe they are John and Victoria.

Kelly's character talks to her gangster husband in prison and takes him to task.

"I already buried a son. You want me to bury another, then you will bury me too," she says in the movie.

That's a reference to John Sr. recruiting John Jr. and also to the death of their 12 year son, Frankie, the victim of an accident: hit by a driver who later turned up dead!

That part of the story is well told, but New Yorkers won't learn much they don't already know -- meaning the biggest crime here is the waste of time.

There is a going-through-the-motions quality that makes for a dull movie that is violent enough, but curiously, as other critics have pointed out, it's "devoid of tension" and, ultimately, not worth your money.