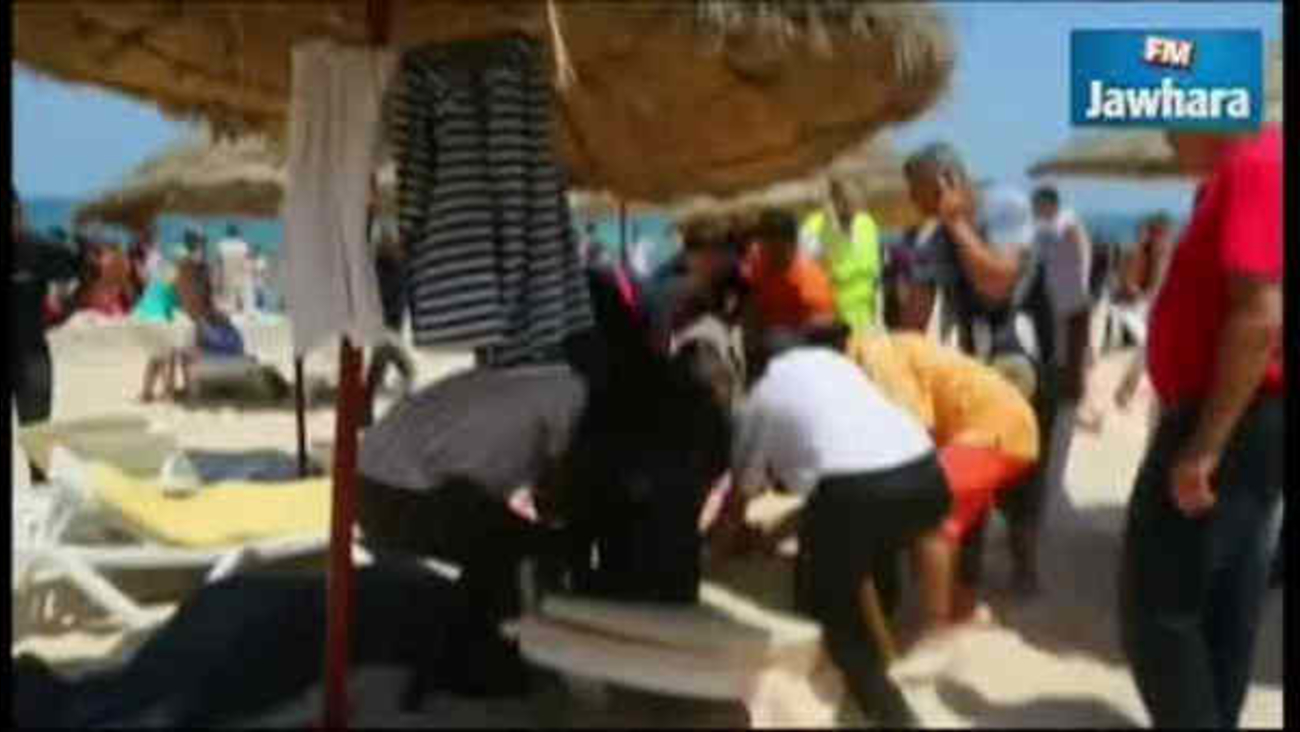 TUNIS, Tunisia -- A young man unfurled an umbrella and pulled out a Kalashnikov, opening fire on European sunbathers in an attack that killed at least 28 people at a Tunisian beach resort - one of three deadly attacks from Europe to the Middle East on Friday that followed a call to violence by Islamic State extremists.

The killings in the Tunisian resort of Sousse happened at about the same time as a bombing at a Shiite mosque in Kuwait and an attack on a U.S.-owned factory in France that included a beheading. It was unclear if the violence was linked but it came days after the IS militants urged their followers "to make Ramadan a month of calamities for the nonbelievers." In all, at least 54 people were killed.

The attack in Tunisia, the country's worst ever, comes just months after the March 18 assault on the national museum in Tunis that killed 22 people, again mostly tourists, and has called into question the newly elected government's ability to protect the country.

Authorities initially thought there was more than one gunman in Friday's attack, but top security official Rafik Chelli told The Associated Press later that it was just one person, a young student not previously known to authorities. The rampage at the RIU Imperial Marhaba hotel ended when he was shot to death by police.

"He was certainly involved with certain extremists," said Chelli, the secretary of state of the Interior Ministry.

The attack followed two others Friday in France and in Kuwait. The Islamic State group claimed responsibility for an attack at a Shiite mosque in Kuwait City that killed at least 25 people, while a man with ties to Islamic radicals rammed a car into a gas factory in southeastern France, where a severed head was found on a post at the entrance.

In a video released Tuesday, the Islamic State called on its supporters to increase attacks during Ramadan and "be keen on waging invasion in this eminent month and commit martyrdom."

The carnage in Tunisia began on the beach, where tourists described hearing what sounded like fireworks and then running for their lives when they realized it was gunfire. Video footage of the aftermath showed medics using beach chairs as stretchers to carry away people in swimsuits.

"He had a parasol in his hand. He went down to put it in the sand and then he took out his Kalashnikov and began shooting wildly," Chelli said.

The gunman then entered the pool area of the Imperial Marhaba hotel before moving into the building, killing people as he went.

There were no details about the nationalities of the victims, but during the holy month of Ramadan, Tunisia's Muslim population is less likely to go the beach, so those there would have been predominantly foreign tourists. Local radio said most of the dead were German or British.

British tourist Gary Pine told AP he was on the beach with his wife around noon when heard what sounded like firecrackers going off very quickly. They shouted for their son to get out of the water, grabbed their bag and ran for the hotel. Their son told them he saw someone shot on the beach.

Back at the hotel, the situation was "sheer panic. There were a lot of concerned people, a few people in tears with panic and a few people - older guests - they'd turned their ankles or there was a few little minor injuries and nicks and scrapes," Pine said.

Elizabeth O'Brien, an Irish tourist on holiday with her two sons, told Irish Radio she was on the beach when the shooting began.

"I thought, 'Oh my God. It sounds like gunfire,' so I just ran to the sea to my children and grabbed our things" before fleeing to their hotel room, she said.

Since overthrowing its secular dictator in 2011, Tunisia has been plagued by terror attacks - though only recently have they targeted the vital tourism sector. Tourism is a major part of the Tunisian economy, especially in coastal resorts like Sousse, and it suffered in the aftermath of the 2011 revolution.

"Tunisia's economy is heavily dependent on tourism and that revenue is now about to all but disappear, leaving Tunisia in dire straits at a critical junction in its political transition," North Africa analyst Geoff Porter said.