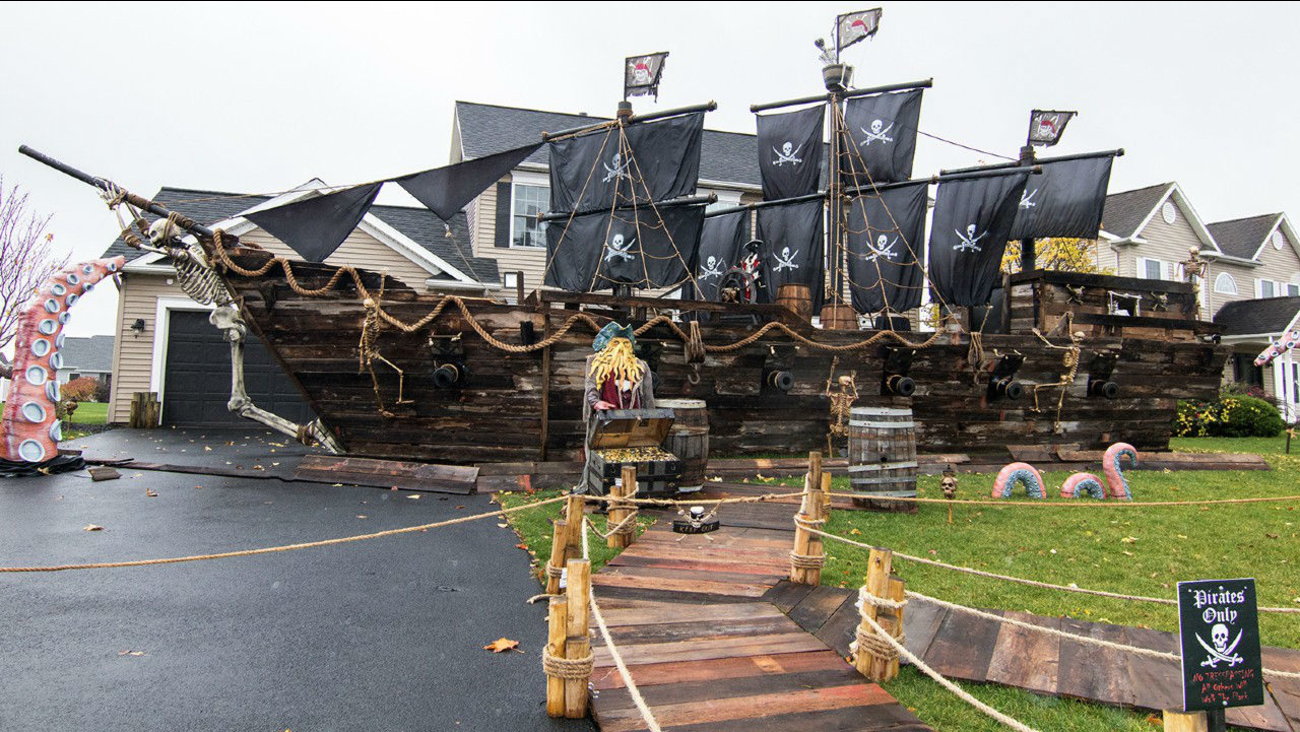 The pirate ship after it was completed. (Tony DeMatteo)

A father in New York won Halloween by building a 50-foot long, 20-foot tall pirate ship that towers in front of his home in Rochester.

"I have no background in this, I just do it for fun for my kids, and that's what makes it so great," Tony DeMatteo told CNN. "It's also been a rough year for a lot of people so we decided this would be a perfect opportunity to put a smile on people's face and just give them a sense of normalcy."

The father of three said he was motivated to build the pirate ship by his children, whose faces "light up with excitement" whenever they see Halloween decorations.

A few years back, DeMatteo's now 13-year-old daughter asked for a "Pirates of the Caribbean" themed Halloween. To make her wish come true, he designed a small pirate ship. But this year's ship is twice as big.

Made from recycled metal, wood, and rope, the vessel is complete with black pirate flags and a huge skeleton hanging from the bowsprit. It's also outfitted with some impressive effects, including six cannons that light up, a fog machine and even fire blasters. DeMatteo said he also produced a soundtrack that synchronizes with the effects of the cannons and fire blasters.

The whole project cost about $3,000 in supplies and took a week to build, he said.

"It might look expensive but I bought everything second-hand and made a lot of the props myself," DeMatteo said. "It's been gathering crowds and everyone just loves it. When people come by they get so excited, it's fun to see how much people enjoy it."

While the purpose of the pirate ship was to bring joy to his family and his community, there's also a good cause behind this dad's Halloween spirit.

DeMatteo asks people who stop by to bring canned goods or another food donation that he provides to people in need in the community. So far, his garage is completely packed with food donations.

But the fun's not over yet -- on Halloween, two professional pirate actors will be at DeMatteo's home to pirate the ship and give out bags of candy to kids.

What in the world!? Imagine seeing this 9-foot creature with five legs on your evening drive home.