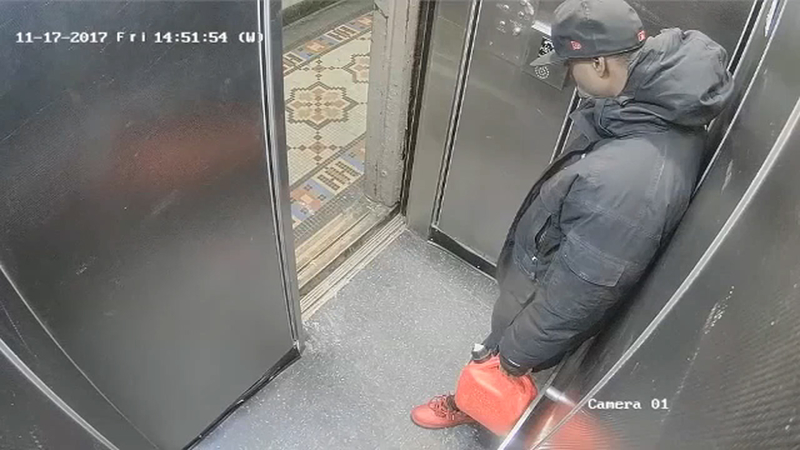 Prosecutors claim that video shows 34-year old arson suspect Jelani Parker leaving his smoke-filled sixth-floor apartment after allegedly setting fire to it back on November 17, and that they have a strong case against him.

"He fled without warning," the prosecutor said at his arraignment. " He knew there were women and children in the building. He put first responders at risk."

Many escaped with just the clothes they were wearing when the six-alarm blaze broke out at 565 West 144th Street in Hamilton Heights. The wind-whipped flames extended through the roof and down to the fifth floor, and 200 firefighters battled the ferocious fire. Three firefighters were injured.

Prosecutors claim in court documents that Parker purchased gasoline and a red gas can in the neighborhood, and that video released by the Manhattan District Attorney's Office shows Parker coming out of an elevator and walking into an apartment carrying the gas can.

He is accused of dousing a room in his apartment that he shared with his mother and father and allegedly setting it on fire. Minutes later, in the same video, Parker is seen leaving the the smoke-filled apartment with smoke quickly filling the hallway.

Parker is charged with arson, reckless endangerment and assault.

"As of right now, as I stand here, I do not have any reason to believe that my client is guilty of those charges," his attorney, Xavier Donaldson, said.

FDNY fire marshals began investigating the suspicious fire and focused on Parker, who prosecutors say had to North Carolina an hour after the fire began.

Camilo Diaz, who works at a neighborhood deli, said fire marshal's came to his store and show him a mug shot.

"Came in and took all the video from the cameras," he said. "They went to several shops around here. They were looking for a suspect."

Prosecutors say Parker then fled to California, where he was arrested in Los Angeles and brought back to New York City.

"We think Mr. Parker is not a flight risk," Donaldson said. "We do not believe the prosecution's case is as strong as they made out."