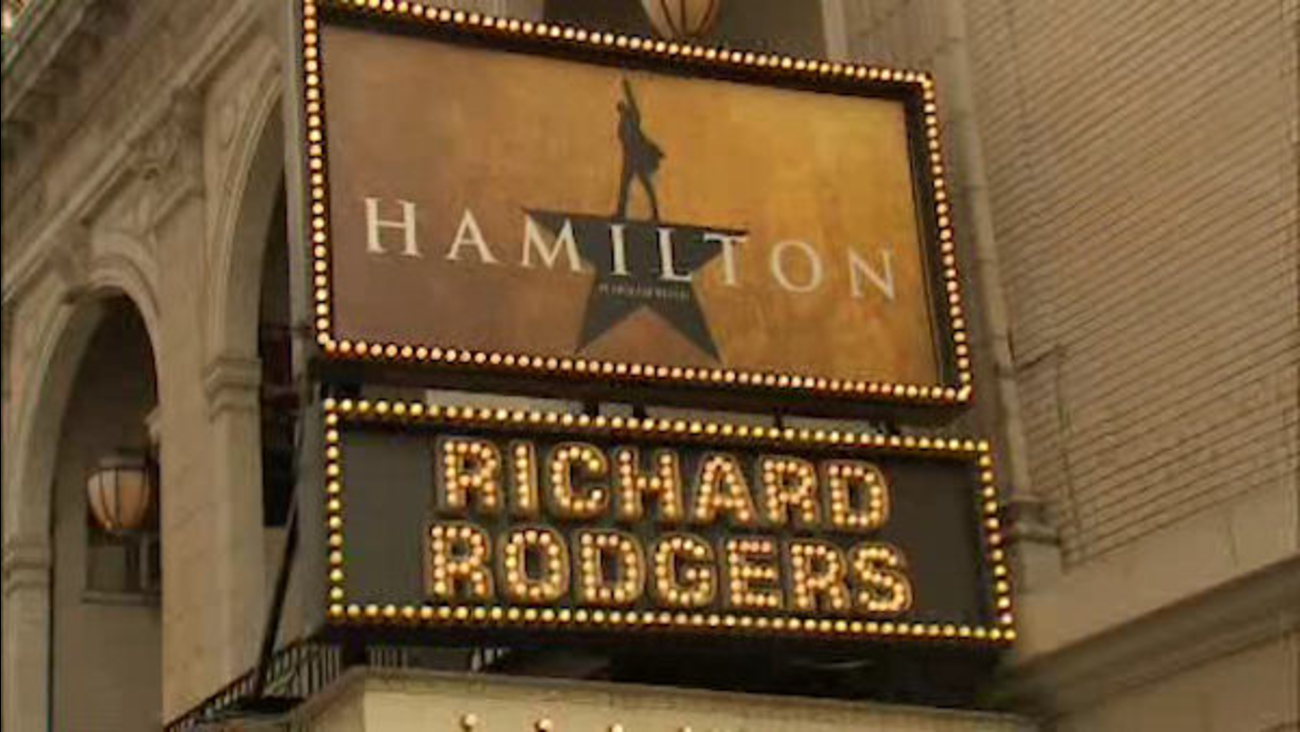 The hip-hop-based musical about Alexander Hamilton, the first treasury secretary of the United States, opened Thursday at the Richard Rodgers Theatre. (WABC)

The Columbia University's prize board on Monday cited "Hamilton" as a landmark American musical about the gifted and self-destructive founding father whose story becomes both contemporary and irresistible." Other finalists were "Gloria," by Branden Jacobs-Jenkins and "The Humans," by Stephen Karam.

"I feel really humbled and really overwhelmed," Miranda told The Associated Press. "Columbia is Hamilton's alma mater so I think that gave me a home-court advantage. But it's extraordinary to be recognized in this way."

"Hamilton," about the first U.S. Treasury Secretary, becomes the ninth musical to win the drama award, joining such shows as "South Pacific," ''Sunday in the Park with George" and "Rent." The last musical to nab the award was "Next to Normal" in 2010.

It tells the story of how an orphan immigrant from the Caribbean rose to the highest ranks of American society, as told by a young African-American and Latino cast. Miranda leaned on Ron Chernow's biography of the Founding Father, but told the tale in common language and verse, transforming Hamilton into "the $10 Founding Father without a father."

Miranda, 36, who wrote the music and story, already has a Tony for creating the Broadway musical "In the Heights," a show which was nominated for a Pulitzer in 2009 and this month won three Olivier Awards in London. He also has an Emmy for writing the opening number for the 2013 Tony Awards.

In the past year, Miranda, whose family came from Puerto Rico to New York, has won a "genius grant" from the MacArthur Foundation, as well as the Edward M. Kennedy Prize for Drama Inspired by American History, which came with $100,000.

The drama award was widely expected to go to Miranda this year. The album for "Hamilton" won a Grammy Award and became the highest-debuting cast recording on the Billboard Top 200 in over 50 years. The show is a leading favorite in this summer's Tony Awards. The libretto, published last week, immediately became a top seller on Amazon.com

"Hamilton" was a sold-out sensation this year when it debuted off-Broadway at New York's Public Theater and amassed a $60 million advance on Broadway. It has been cheered by politicians as diverse as Dick Cheney and President Barack Obama, and celebrities like British actress Helen Mirren, musician Questlove and many others.

The music is a mix of breezy pop, rap battles and slinky R&B. Lyrics are smart and playful, including Hamilton declaring: "In the face of ignorance and resistance/I wrote a financial system into existence."

The Pulitzer drama award, which includes a $10,000 prize, is "for a distinguished play by an American author, preferably original in its source and dealing with American life," according to the guidelines.