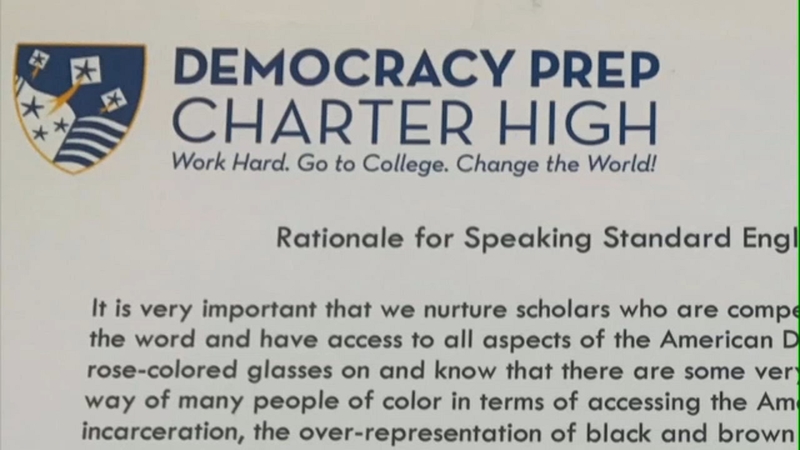 HARLEM, Manhattan (WABC) -- The message from one school was clear - that students had to learn and speak proper English. However, there is controversy over the way one charter school in Harlem delivered that message.

12th-grader Reanna West is upset to say the least after a letter sent by the superintendent of her school. Democracy Prep Harlem High School has a rather noble motto, 'Work Hard. Go to College. Change the World' - it says it right on their letterhead. But it is not the message that has touched a nerve with the senior class, it is how it was delivered.

EXCLUSIVE: This letter sent to students by the superintendent of Democracy Prep Harlem High School has upset seniors. They understand the intent of the message but say tone was disrespectful, reinforced negative stereotypes, and presumed they are uneducated. pic.twitter.com/E5V8f53x7u

The letter, sent on Tuesday titled 'Rationale for speaking Standard English at Democracy Prep' says 'we have to compete with others and there are so many damaging stereotypes out there about black and brown people...not as intelligent as whites or as Asians. These stereotypes are wrong, ridiculous and unfounded.'

Speaking exclusively with Eyewitness News, students say the tone of the letter was disrespectful.

"You're trying to say that I'm uneducated. You think you have to tell me how to speak. And I find it insulting," says West.

The letter goes on to explain the importance of 'code switching; and the superintendent explains how she, too embraces 'black vernacular.'

Students say that it is important that they know how to articulate themselves so they can compete when it comes to applying to college and applying to jobs - especially considering what is happening with racial tensions in America. This is the part of the message that the students agree with.

As well-intentioned as the letter may have been, students say it was not the way to get the message across.

Eyewitness News reached out to the superintendent of the school, but has not heard back.