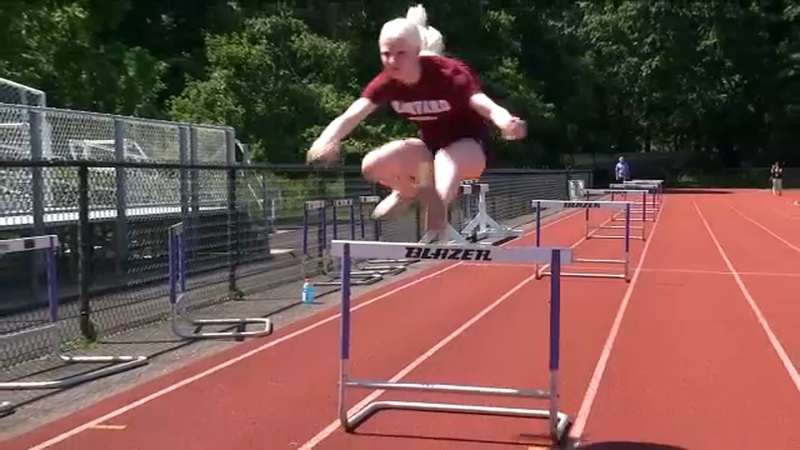 Teen cheerleader, track member who is legally blind to attend Harvard in fall

Bianca McEvoy, 17, of East Norwich, was accepted into the prestigious Ivy League - a dream she has had since she was a little girl.

McEvoy, a triplet, was born with Albinism, meaning she lacks the pigment melanin in her skin, hair and eyes. She is legally blind because of the disorder.

"For me, it's just normal - that's just how it always was," McEvoy said of her limited eye sight.

McEvoy, who has done gymnastics since her younger childhood years, helped bring the Oyster Bay cheerleading team to a national championship in early 2020.

She explained to Eyewitness News how she does cheerleading when she can't see.

McEvoy said she taught herself to the listen to the sounds of her teammates' hands and feet hitting the floor, and used that as a way to master the cheerleading techniques.

She said when she started on the high school track team, she quickly realized she didn't like running, but she loved the hurdles and the high jump.

She said she employs a counting technique to know when to jump over the hurdles or to hit the spot for the high jump.

"So, for the hurdles, there's nine steps to the first one, but five after that," she explained.

Girls' Varsity Track Coach Kevin Cotter said when McEvoy first joined the team, he thought she would be most comfortable doing the running events.

However, when he put two-and-two together -- realizing McEvoy was a talented gymnast and cheerleader -- he steered her toward the hurdles and high jump.

"She's got a lot of Moxie," he said. "For the most part, those kids who show confidence in doing something are most likely, you know, to succeed in other events."

Principal Sharon Lascher said McEvoy will be missed in school for a variety of reasons.

"She is kind, she's smart, she's personable," Lascher said. "And through the year-and-a-half that we just had, I have never seen her without a big, huge smile on the fields, cheering, in the hallways, in her classroom."

Lascher said Harvard is lucky to have McEvoy.

Oyster Bay-East Norwich Superintendent Francesco Ianni said McEvoy is a shining example of all the good that is going on in the district.

"One of the vision that we have in school is empowering all students to achieve excellence, and she's the perfect example of taking everything that we have and bringing it to the next level," he said.

McEvoy said she won't do track at Harvard, but she does plan to try out for the school's cheerleading team.

A photo of a father swan ferrying his babies on his back across the Charles River in Boston is not only heartwarming but also heartbreaking after the death of the mother swan.