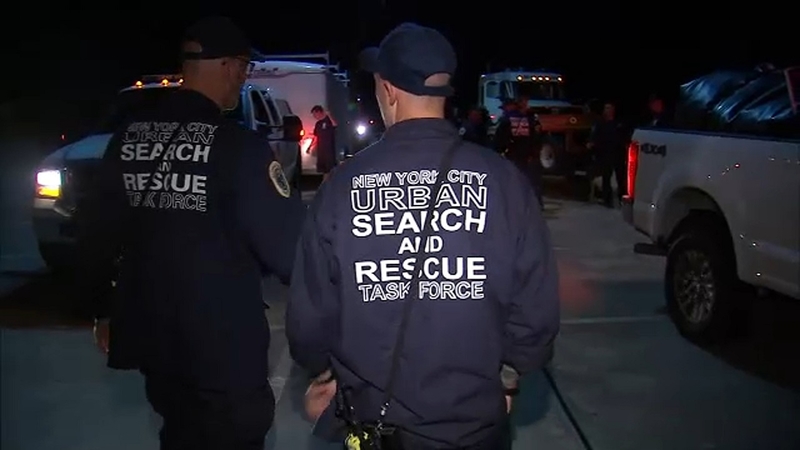 Josh Einiger reports on the devastation from Harvey in Texas

ANGLETON, Texas (WABC) -- In the tiny town of Angleton, Texas they have never seen an NYPD van. The Emergency Services Unit K-9 Team was among 80 other New Yorkers who came to help the flooded towns after Harvey devastated the region. NYPD officers and FDNY members traveled 36 hours across the country in a convoy to help pull people out of their flooded houses.

The task force travels with all its own equipment, including small off-road vehicles. There are also inflatable boats transported from the back of pick-up trucks. As soon as FEMA gives the order on where to go and where people are who need rescuing, these NYPD officers and FDNY firefighters will be on their way to help.
Report a correction or typo
Related topics:
weatherfloodingnypdfdnyhurricane harveyweatherhurricane
Copyright © 2022 WABC-TV. All Rights Reserved.
HURRICANE HARVEY
What to keep and what to toss in a power outage
Mattress Mack gives $10K in furniture to disabled veteran
How Florence stacks up to other historic hurricanes
Deadliest, costliest hurricanes of the past 38 years
TOP STORIES
LIVE: 14 students, 1 teacher dead in TX school shooting, gov says
Alleged shooter in unprovoked subway murder surrenders
Gas station charges nearly $8 a gallon ahead of holiday weekend
DA: Gang members taunted rivals in rap videos, beat bird to death
'Immeasurable loss' felt 3 years after Jennifer Dulos disappeared
Man caught on camera robbing 90-year-old woman on Upper West Side
NOAA predicts above average hurricane season, releases storm names
Show More
NY cancels history and government Regents exam after Buffalo shooting
2 women fatally struck in 2 hit-and-run crashes on Long Island
Fresh Kills landfill closure certified, transition into park continues
AccuWeather: Cooler with clouds and sun
Father of Texas yoga instructor accused in cyclist's murder speaks out
More TOP STORIES News