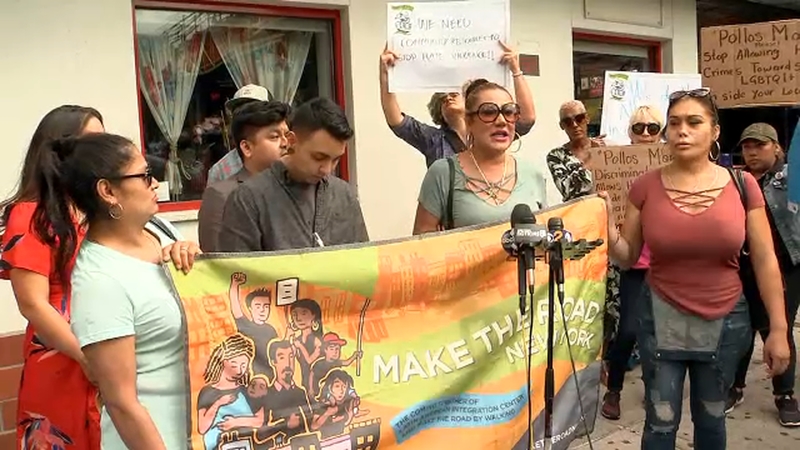 JACKSON HEIGHTS, Queens (WABC) -- An attack on two LGBT individuals in the Jackson Heights section of Queens is sparking outrage and prompting calls for justice and tolerance.

The incident happened around 4:30 a.m. on Thursday September 12.

The 36- and 39-year old victims were eating at Pollos Mario on Roosevelt Avenue when they were approached by a group of several men, who advocates say began verbally attacking them based on their sexual orientation.

An argument ensued, and the men ended up beating and kicking the victims before fleeing the restaurant in a vehicle.

"There were eight people," said one of the victims, Daniel Dominguez. He said his friend Alberto Cruz needed 40 stitches to close the cut on his forehead, and said they were targeted because they were gay.

"Basically at that time of the morning this place is full of the community, mostly gay people," said Dominguez. "We were eating together and probably that's how they assumed we were partners or something."

The victims were both taken to NYC Health and Hospitals/Elmhurst and treated for injuries.

All the suspects remain on the loose.
At a news conference Tuesday afternoon, advocates were calling on community members to take a stand when witnessing violence against members of the LGBT community.

No one, they said, including restaurant employees, tried to stop the attack from happening.

"What the security guard told him was, you both should finish eating and you should go, instead of providing any kind of support. This is completely unacceptable," said Mateo Guerrero of Make the Road New York.

But a spokeswoman for the restaurant told reporters that the staff tried to intervene, and that surveillance video indicates there is plenty of blame on both sides of the melee.

"Regardless of what started the fight, we would have never wanted a fight to take place in the first place, right," said Jacqueline Franco. "And we did everything we could at the moment to stop it."

The restaurant has turned the video over to the NYPD Hate Crimes Task Force, which is investigating. No charges have been filed in the case so far.