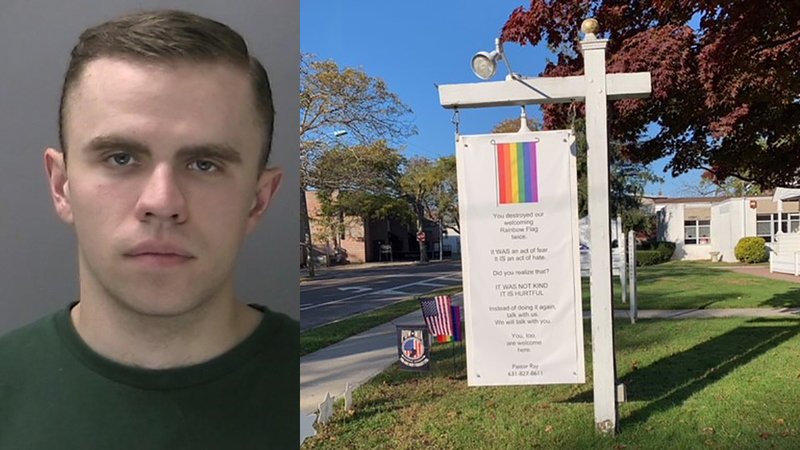 SAYVILLE, Long Island (WABC) -- A man is under arrest and facing hate crime charges after police say he stole LGBT flags from a Long Island church on six separate occasions, several of which came after the church posted a sign pleading with the suspect to talk with them.

Authorities say 21-year-old Ronald Tyler Witt, of Sayville, is charged with six counts of petit larceny as a hate crime.

Hate crime detectives said the flag was first stolen from the front of the Sayville Congregational United Church of Christ, located on Middle Road, on July 29. Pastor Ray Banguolo said the first incident actually happened a few weeks earlier, but that he didn't report it until the second incident.

"At first I thought it had just been blown off or maybe somebody was messing with it, but then it started happening on a regular basis," he said. "Two weeks later, it happened again."

Banguolo posted a sign outside in August, reading: "You destroyed our welcoming Rainbow Flag twice. It WAS an act of fear. It IS an act of hate. Do you realize that? IT WAS NOT KIND. IT IS HURTFUL. Instead of doing it again, talk with us. We will talk with you. You, too, are welcome here."

He said he called police after the fourth incident and told them he wasn't putting the flag back up until he got surveillance cameras, which the Suffolk County police Hate Crime Unit set up in September.

After an investigation, Witt was arrested at his home Tuesday night.

"This 21-year-old person who's in a heap of trouble and at least at this point is accused of hate crimes, that's a horrible thing," Banguolo said. "I feel for him, I feel for his family."

A defense attorney said in court that it was a prank and nothing more, but prosecutors say Witt made an oral admission to police that he "didn't want to see a gay flag on a church." He also left an American flag and a POW flag that are also at the scene.

"The sign was meant to say, you know, look, do you know what you're doing here? Do you realize this is hateful, it's harmful, it's hurtful?" Banguolo said. "I think there's something there. I think it's a statement."

Bail was set at $12,000, and if released, Witt will have supervised release and will have to wear a GPS die to a probationary issue on a separate case.