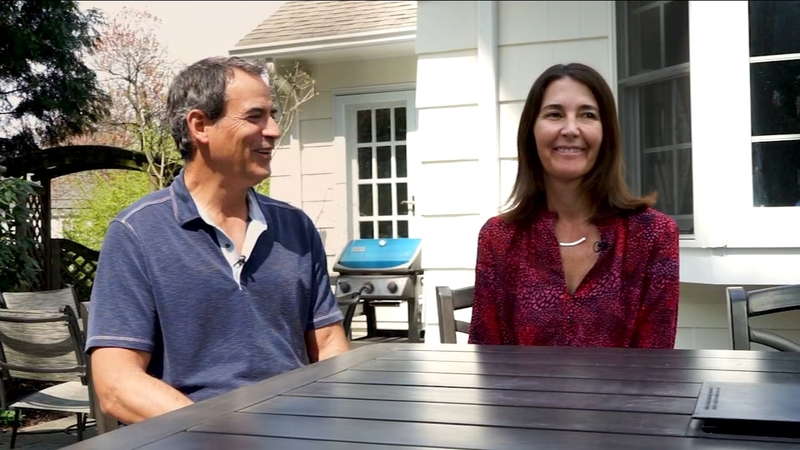 NEW JERSEY (WABC) -- We've seen remarkable advancements in medicine over the past year with the COVID-19 vaccine. But for a New Jersey mother dying from ALS, the advancements couldn't come soon enough.

Like most people did in 2014, Lisa Stockman Mauriello did the ice bucket challenge, where she was video tapped getting a bucket of water dumped over her head and she posted it to social media. It helped bring worldwide attention to the disease ALS.

Mauriello had no way of knowing then, that it would become her greatest challenge. She was diagnosed with a rare, genetic form of the disease in January and is deteriorating quickly.

"She was a picture of health, until this happened," said Lisa's husband Bob Mauriello. "You wouldn't know it by look at her, she has been very strong," he said.

She's mentally strong, even though less than four months after her diagnosis she lost control of an arm, a leg and the disease has stolen her ability to speak. She mouths the words instead.

"I certainly don't mind talking, in general, but I'd much rather hear her voice and her laugh and to know that I won't hear it again, is hard," said Bob as he fought back tears.

There's a promising new drug that could help Lisa. It's called Tofersen by a company called Biogen.

"It could extend her life several months if not longer and just arrest the progression of the disease," said Bob.

But, Lisa can't get the drug. Even though it looks promising, it's still in the third phase of clinical trials and hasn't been approved by the FDA yet.

Federal lawmakers passed what's called The Right to Try Act, a law allowing patients like Lisa access to unapproved treatments. Even so, Biogen is still saying no.

The released a statement that reads in part, "We are working as fast as we can and preparing to open an Early Access Program after patients in the study are no longer randomized to placebo and if the study data show that tofersen is safe and effective."

"It's a bit of a cowardly move on part of the company," said former FDA Associate Commissioner Peter Pitts. While patients have the right to ask for the drug, companies have the ultimate right to say no.

"We have to cut right the chase," said Pitts. "These patients need help and they should get help and companies should strive to provide their products, even under extraordinary circumstances and not make excuses."

Lisa's still hoping the drug can help give her more time with her family. Each one of her three children are graduating this spring, one from middle school, one from high school and the oldest from college. She wants to be there for the events and everything that happens in between.

More than 100,000 people signed an online petition on change.org pleading with Biogen to allow Lisa access to the drug.

"We share the urgent desire to bring new medicines to people suffering from ALS. We continue to bring together people across the organization with expertise in bioethics, medicine, research and regulatory guidelines as well as our most senior leadership to challenge our own policies in light of the situation for Lisa and other people with ALS.

Obtaining approval for a new drug from regulatory authorities around the world is the fastest way to help the largest number of people with a specific disease.

Our Phase 3 placebo-controlled study of tofersen is designed to investigate the safety and efficacy of tofersen in people living with SOD1-ALS. The study has completed enrollment and data are expected in the second half of 2021.

We are working as fast as we can and preparing to open an Early Access Program after patients in the study are no longer randomized to placebo and if the study data show that tofersen is safe and effective.

We are acting as quickly as possible with the interests of all patients in mind within the current regulatory framework, with the hope of bringing new medicines to the ALS community."


----------
DO YOU NEED A STORY INVESTIGATED? Dan Krauth and the 7 On Your Side Investigates team at Eyewitness News want to hear from you! Call our confidential tip line 1-877-TIP-NEWS (847-6397) or fill out the form BELOW. You can also contact Dan Krauth directly: