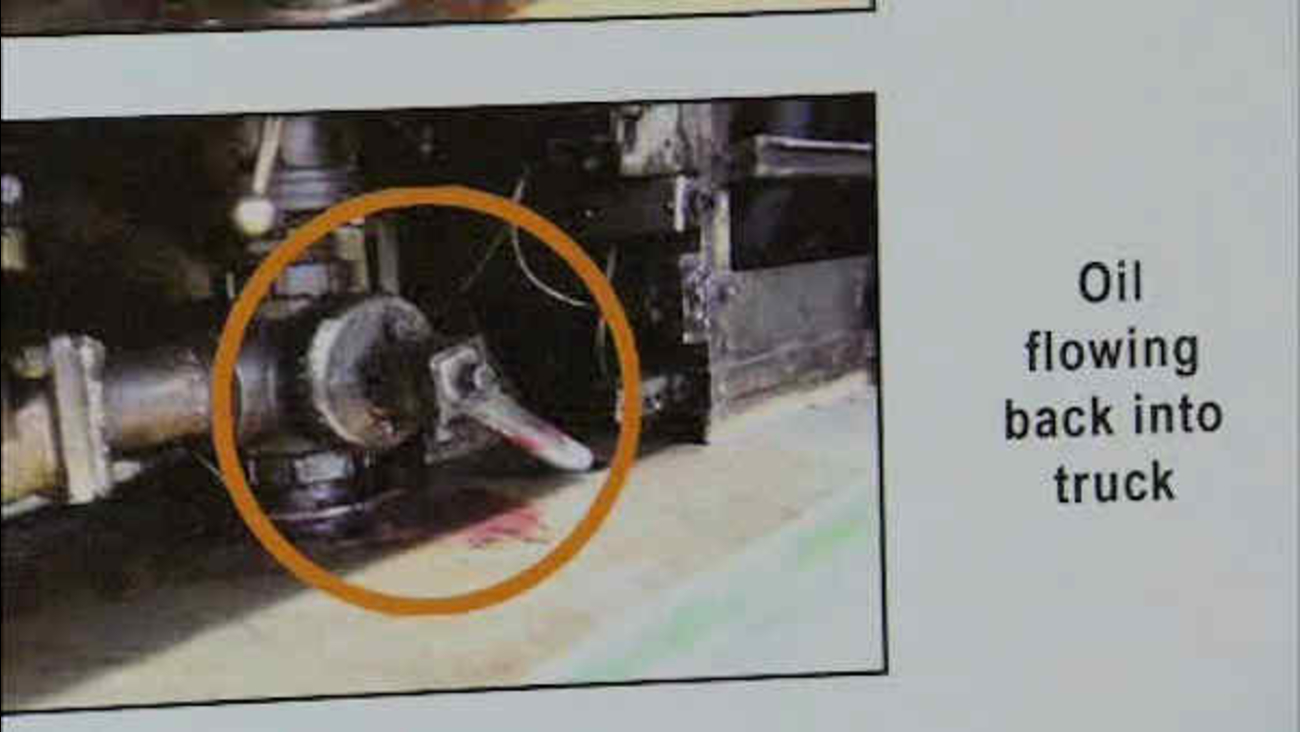 Instead of delivering full orders to their customers, the businesses are accused of skimming some of it off the top and then selling it on the black market.

And hundreds of victims include the NYPD, hospitals, schools and homeowners.

Department of Investigation Commissioner Mark Peters was among the authorities who issued a detailed report on the alleged schemes used by the delivery companies in the wake of an extensive two-year investigation that resulted in the indictments and arrests of 44 people from nine fuel delivery companies.

The suspects are charged with routinely stealing heating oil from both private consumers and city agencies at an estimated cost of at least $18 million annually, with an estimated $4 million stolen annually from New York City.

The report offers background on how these scams occur, warning signs for consumers, and details more than a dozen recommendations city agencies have already begun to take to deter further thefts.

"The city spends millions of dollars each year on fuel deliveries to agency buildings, money that is literally being siphoned by unscrupulous fuel delivery companies through various fraud schemes," Peters said. "Our report on this investigation sets forth new internal controls that will stem the tide of shorting with real solutions and reliable protocols that protect the integrity of the industry and the city's coffers."

The city's heating oil trucking industry has been the subject of multiple federal and local investigations for decades, largely for extensive ongoing fraud schemes that "short" or intentionally deliver less fuel than what was ordered.

A first-time Citywide Heating Oil Task Force comprised of more than 20 agencies was formed to offer lasting and effective solutions, and the group identified more than a dozen processes and standard protocols that all agencies will now employ to ensure accountability and mitigate the risks of being shorted.

1. Maintain a centralized database that identifies all operational fuel tanks and all pertinent information (size, location, grade, type of gauge);
2. Proactively monitor the daily fuel usage at each location to identify any irregularities;
3. Require that all deliveries be scheduled and supervised by a Building Representative;
4. Schedule fuel deliveries centrally by agency, not through the specific location, and automatically when quantity of fuel is below a pre-determined percentage capacity;
5. Train designated personnel regarding their responsibilities during the fuel delivery processes, including receipt and review of the vendor's fuel delivery ticket;
6. Install fuel level gauge devices at every location receiving deliveries of heating oil, which should be regularly tested and recalibrated. Fuel Delivery Alarms should be regularly checked and maintained;
7. Document fuel deliveries in both an onsite logbook and in a centralized agency database;
8. Record and track daily measurements of fuel levels using both the gauge and stick;
9. Distribute a fuel delivery checklist, including "red flags:" (i) confirming the fuel delivery vendor has a valid DCA inspection certificate; (ii) checking the seal on the meter to ensure it has not been tampered with; (iii) looking at the start-stop times on the delivery ticket; (iv) checking the width of the largest hose that DCA inspected, and/or only accepting deliveries from the largest hose that was inspected by DCA; and (v) confirming that the rate of flow from the fuel tank during the inspection matches the rate of flow at the delivery location (for example, if DCA measured 60 gallons/minute and the rate at the location is 120 gallons/minute, it can indicate that there is water mixed in with the product);
10. Measure fuel amounts immediately before and after delivery, while the vendor is present, using gauge and stick. Re-measure 30 minutes after delivery. Record data and compare with vendor delivery ticket;
11. Link the centralized fuel ordering and delivery database to the agency's Accounts Payable unit. Fuel Shortage Reports should be submitted to a central monitoring unit, and "stop payments" should be automatically issued if a fuel shortage occurs;
12. Reconcile the delivery amounts with the amounts ordered and invoiced. Audit all payments, and check for any duplicate invoices; and
13. Take random, but regular, fuel samples during deliveries.
Related topics:
home & gardennew york cityoil heatscamfraud
Copyright © 2022 WABC-TV. All Rights Reserved.
TOP STORIES
Woman walking with baby stroller shot to death in Manhattan
Mother, half-brother facing murder charges in 7-year-old girl's death
R. Kelly sentenced to 30 years on sex trafficking conviction
NYC's pandemic exodus ending; Rent prices could get even higher
Man snaps pic of vintage Burger King walled-off inside Delaware mall
Police search for man after 3 people found dead inside Queens home
7 On Your Side, congressman team up to save homeowner from foreclosure
Show More
AccuWeather: Very Warm
Couple allegedly ran sex trafficking ring on OnlyFans: DA
U.S. buys 105 million COVID vaccine doses for fall campaign
Taco Bell testing new menu item with oversized Cheez-It
Firefighters battle blaze at auto repair shop in New Jersey
More TOP STORIES News