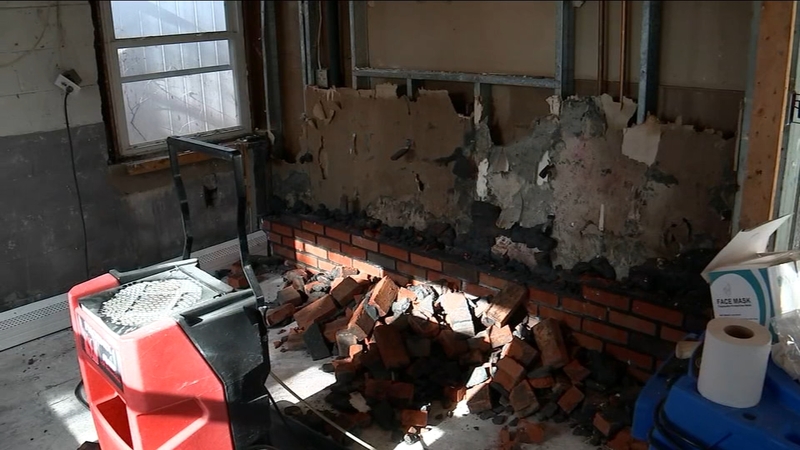 HUNTINGTON STATION, Long Island (WABC) -- The blast of cold air in our area the last couple of days led to a big mess on Long Island, where a water pipe burst and flooded the dining hall of a rescue mission in Suffolk County.

The dining hall was set to open next week after being closed for two years due to the pandemic, but it will remain closed for the time being after suffering severe water damage from a burst pipe.

Helping Hands Rescue Mission in Huntington Station planned to reopen its dining hall January 25 to serve hot meals to hungry families. The last time they did so was March 2020.
The hall had just been renovated for free through a grant from Lowe's.

A frozen sprinkler pipe burst on Monday morning causing severe damage throughout the building and tearing apart all the renovation work.

Rescue Mission President Kim Gaines-Gambino said she was sleeping at home when the water sensor alarm from the dining hall went off.

She ran to the mission building on Broadway, opened the door and water came gushing out. She said she waded into water up to her calves and turned off the water.

He has known Gaines-Gambino since childhood and often volunteers to help the Rescue Mission.

He said the amount of water which came out of the pipe and the force of it is the reason for the catastrophic damage.

"The sheet rock fell," he said. "The insulation fell, the lights came down."

Gaines-Gambino said they will repair and rebuild the building.

"I'm a person of faith," she said. "I always trust God and His bigger plan."