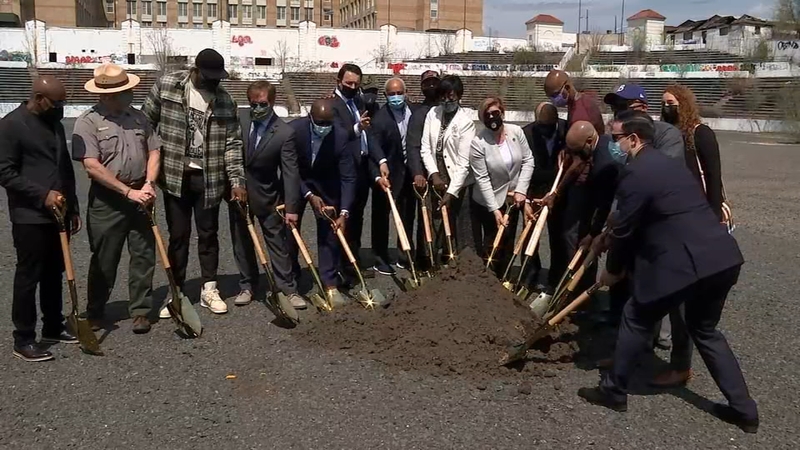 PATERSON, New Jersey (WABC) -- The city of Paterson broke ground Wednesday on a $94 million renovation to restore Hinchliffe Stadium, one of the last remaining Negro League ballparks, to its former glory.

"This in an investment in our youth," Larry Doby, Jr., said. "And when you invest in youth, you can never go wrong."

The complete restoration of the Depression-era ballpark will include 7,800 seats and ground-up development of a 75-unit affordable senior housing building, a 315-spot parking garage, and a 12,000-square-foot restaurant and event space that will pay homage to the trailblazers who called Hinchliffe home in its early days.

A Paterson landmark built in 1932, Hinchliffe Stadium was once home to the New York Black Yankees and New York Cubans in an era when many of baseball's most talented players were barred from the sport's biggest stage.

A new commitment from the city government paired with a $70 million cash infusion could restore Hinchliffe Stadium, one of the last remaining Negro League ballparks, to its former

"For me, to be able to be a part of this, it's inspirational," former MLB star and Mets manager Willie Randolph said. "But I want to be a part of that legacy so we can continue to grow as we give these kids our knowledge."

Over the decades, the ballpark hosted a wide range of athletic and cultural events, including high school sports -- playing host to Paterson native Larry Doby, among countless other local student athletes -- as well as motorcar racing, boxing tournaments, and concerts.

Doby was the second black ballplayer to join Major League Baseball, a few months after Jackie Robinson. He broke the American League color line when he joined the Cleveland Indians in July of 1947, fully integrating pro baseball.

"I literally would not be who I am if it wasn't for places like this, guys like like Larry Doby, Jackie Robinson," retired Yankees star pitcher CC Sabathia said.

But Doby was breaking records long before that, as a four-sport star at Paterson's East Side High School. Back then, when he was scoring touchdowns, hitting home runs, and sprinting around the track, he was doing it at Hinchliffe Stadium.

It was also at Hinchliffe where Doby had a tryout for the Newark Eagles, the Negro League team where he first made his name.

The venue was also the site of the 1933 Negro League World Series.

Anthony Johnson reports on the historic stadium in Paterson, NJ.

The once-proud stadium, however, became a symbol of decades of urban decay, dereliction and destruction. It became shelter for the homeless, a place where weeds became trees and what once was became nothing but a distant memory.

The last of the stadium's useful days saw it turned into a parking lot and then abandoned, but now, there is hope it can once again become a pillar of the community.