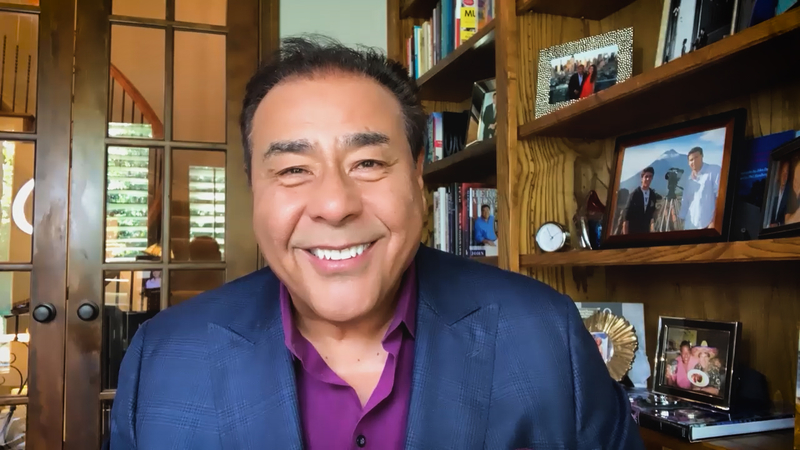 NEW YORK (WABC) -- John Quiñones was one of ABC News' first Hispanic correspondents and is now the beloved host of ABC's "What Would You Do?".

However, getting to where he is now was no easy task.

"I was told many times that I'd never make it in radio, or television. That perhaps I had too heavy an accent or too dark-skinned. They judged me by the color of my skin and the accent in my voice," said Quiñones.

From a migrant farm worker to ABC's beloved 'What Would You Do?' host, John Quiñones tells his story of hardships and perseverance.

He was raised in a migrant household, didn't speak English till he was six years old, and even worked the fields with his family as migrant farm workers. It was in the fields when his father asked him if this was the kind of life he wanted or if he wanted a college education.

"It was a no brainer," Quiñones said. "But no one believed in me!"

Quiñones credits his mother for believing in him, for pushing and motivating him to go after his dreams.

"She would say, 'mijo, that doesn't matter. What matters is what's in here, in your brain and here in your corazón'," said Quiñones.

At the time, there were very few Hispanic people on television or telling the stories of the Latino community. Quiñones wanted to change that.

"We had stories to tell and I knew that they would prove enlightening," said Quiñones.

But getting in front of the camera to tell these stories would not be an easy thing to do. Quiñones applied to eighty-one stations and no one would hire him. It was a tough time.

"I know that some of that was the fact that everyone had their one Hispanic reporter and maybe they thought that was enough," said Quiñones. "Now, I look around and we have a good number of Latinos, especially at ABC."

He also reports across all ABC News platforms including for 20/20. His latest project was a two-hour 20/20 on the Vanessa Guillen story, a story he knew he had to share.

He wants to be remembered as the guy who told stories that needed to be told. As a person brave enough to go where others didn't want to look. And a person that helped shine a light on the darkest corners of the world that were being ignored.

Quiñones hopes that others will see his journey and be inspired to chase their dreams.

"I sort of cut the path with my machete so that the person behind me will have it perhaps a little bit easier," said Quiñones.