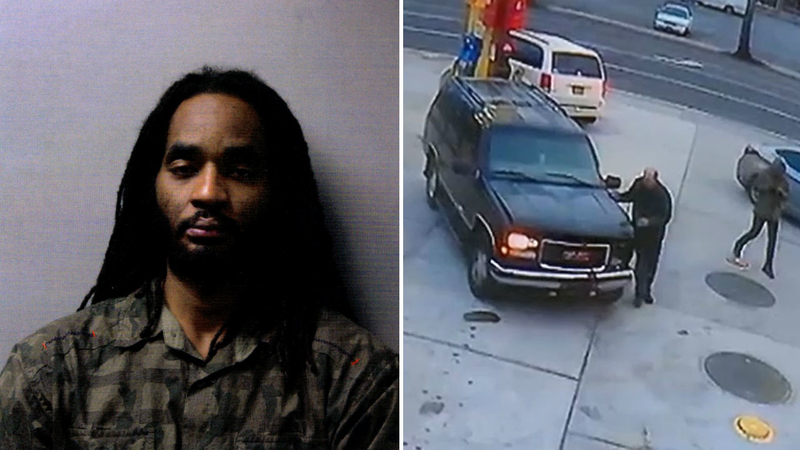 SOUTH HEMPSTEAD, Long Island (WABC) -- The man accused of intentionally running down a gas station employee and fleeing the scene of the deadly hit and run is back on Long Island and charged with second-degree murder.

Joshua Roston turned himself in to authorities outside Philadelphia in January, but he had been fighting extradition back to Nassau County.

Roston, 33, was allegedly trying to flee without paying after receiving $22 in gas when Cemal Dagdeviren, an auto mechanic, went to help out the attendant and stood in front of the car at the business on Grand Avenue in South Hempstead.

Police say Rolston ran over the 59-year-old, who was taken to the hospital and pronounced dead.

"An innocent 59-year-old man lost his life because this defendant allegedly chose to run him over rather than pay for $22 worth of gas," District Attorney Madeline Singas said. "This senseless murder shocks the conscience, and our prosecutors will aggressively seek justice for Mr. Dagdeviren and his family."

Tips first helped them recover Roston's vehicle, which had no plates yet was somehow able to get all the way to Avondale, Pennsylvania, until it ran out of gas or broke down.

He is also charged with robbery, petit larceny and leaving scene of an accident.

Roston's attorney, Joseph LoPiccolo, said his client feared for his own safety and that he and the gas station attendant had gotten into an altercation just before the incident. He also said Roston didn't know he had killed Dagdeviren.

"He believes he was fleeing for his own safety at that time," he said. "I don't know that he knew the circumstances how he left it with the person, however, my understanding is, when he spoke with the police, according to the District Attorney's Office, he did reference self-defense and that he feared for his safety under those circumstances."

Authorities say they believe Roston stole gas without paying on several occasions at other gas stations.

"This wasn't a first time occurrence for Mr. Roston," Nassau County police Detective Lieutenant Stephen Fitzpatrick said. "He knew what he was doing, and on that day, he chose to take his life."

Dagdeviren's family was at Roston's court appearance but did not want to speak with the media.

"I think it might give just a small level of comfort, a small amount of comfort to the Dagdeverin family, that the guy who did this has been extradited back here, he's In custody here, the DA will take over and make sure that he's prosecuted to the full extent of the law," Nassau County Executive Laura Curran said.

Roston has been convicted previously of assault on an Nassau County police officer and has convictions in New Jersey, Pennsylvania and North Carolina on other crimes.