NYPD investigating threat against schools, considers it a hoax 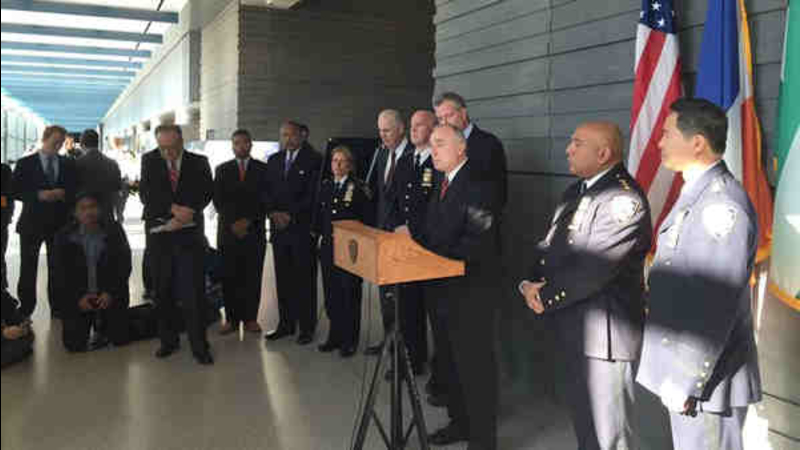 Mayor Bill de Blasio told reporters that he was "absolutely convinced" that there was no danger to schoolchildren in New York and said no serious thought was given to canceling classes.

The threat came via email around 5 a.m. and was very similar in nature to the threat made to Los Angeles schools. The mayor and police Commissioner William Bratton said it was generic, posed to numerous school systems simultaneously and that the wording suggested it was a hoax.

"It was so generic, so outlandish and posed to numerous school systems simultaneously," de Blasio said. "There were wording choices and other indicators that suggested a hoax and not anything that we could associate with jihadist activity."

The email was reportedly sent to a New York City school superintendent and warned that every school in the city would be attacked by the author and "138 comrades" armed with pressure cooker bombs, nerve gas agents and machine guns.

"Safety is my first priority under all circumstances, but we felt very confident this was the right thing to do," said Carmin Farina, NYC Schools Chancellor.

The right thing, Chancellor Farina felt, was to leave schools open throughout New York City in the face of a threat of a large-scale jihadi attack with guns and bombs.

"It escalated up to NYPD, which is our protocol. NYPD contacted the FBI who said it was not a credible threat, so as a result the mayor, Bratton and myself made the decision to keep schools open," Farina said.

The NYPD is in touch with the FBI and said there was no reason to close any New York City schools.

"We are concerned with overreacting," Bratton said. "We will stay aware, we will stay involved, but at all costs do not overreact to what will likely be a series of copycats."

Bratton, who once ran the Los Angeles Police Department, quipped that it looked like the sender watched a lot of the Showtime show "Homeland."

"We cannot allow ourselves to raise levels of fear," Bratton said.

He said the person who wrote the note claimed to be a jihadist, but made errors that made it clear the person was a prankster, including spelling the word "Allah" with a lowercase "a." The person making the threat also claimed that every school in the city -- the largest public school system in America -- was somehow rigged to explode.

"The students at every school in the New York City school district will be massacred, mercilessly. And there is nothing you can do to stop it," it said.

The anonymous writer claimed to be a devout Muslim student at one of the high schools in the district who had been bullied, and out of anger had "teamed up with a local jihadist cell."

Most parents who spoke with Eyewitness News said they had no idea about the threat, and although they were pleased to hear it was dismissed as a hoax, many were surprised at the mayor's decision to keep schools open. But de Blasio that any last-minute decision to close down would produce chaos and even undue panic.

The threats in Los Angeles resulted in the city closing all schools.