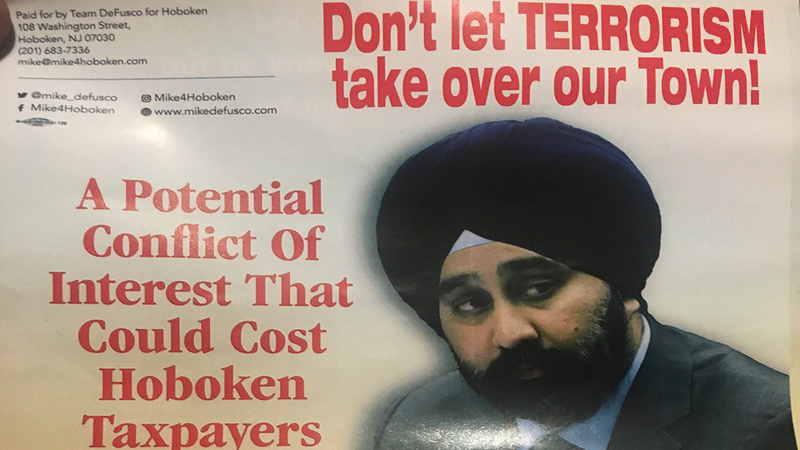 HOBOKEN, New Jersey (WABC) -- The campaigns in the race for mayor of Hoboken are denouncing what they call bogus flyers about a Sikh candidate.

Hoboken City Councilman Michael DeFusco was out at the Hoboken PATH station Monday night, trying to win a few last minute votes after his campaign for mayor seemed to get slammed by a flyer that appeared to be aimed at one of his opponents.

"I was victimized too by a flyer that basically associated me with racism," DeFusco said.

The flyer calls that other candidate, Councilman Ravi Bhalla, a terrorist.

"Sort of a pit in my stomach, you know, you don't really know how to react to that. I was most concerned about my wife and children, it was my daughter's first experience with racism. It was difficult to explain to a child what that actually means," Bhalla said.

Councilman Bhalla is a member of the Sikh faith, he wears a turban in Sikh tradition, proudly.

Police say the flyer was handed out by a man caught on surveillance video, and they are looking for him. A note on the flyer says it was paid for by Councilman DeFusco which he says is not true and, in liberal Hoboken, makes him a victim too.

"It's a quick retweet, it's a quick news story, it gets eyeballs, but what it also does is it can alter elections. This election is being altered by fake news," DeFusco said.

"I don't know who is responsible for this, there is an active police investigation into finding the culprit," Bhalla said.

Councilman Bhalla said that if there is a silver lining in this, it is that it has increased awareness in the election on Tuesday so maybe more people will vote.