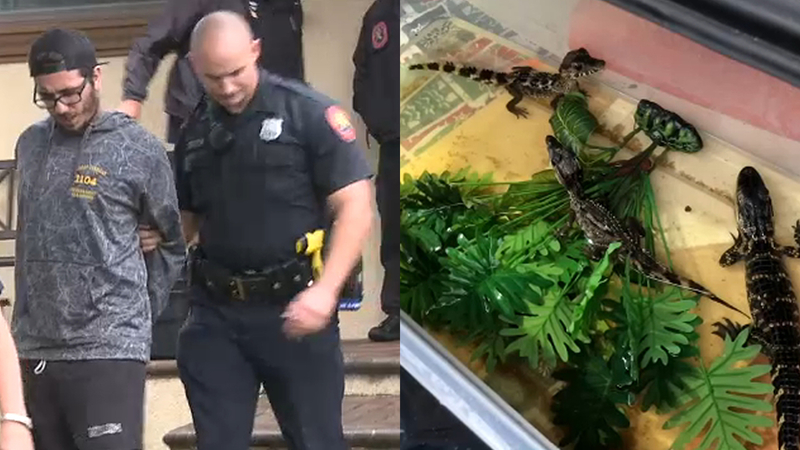 Many of the reptiles were found crawling in the trunk and stuffed into the back seat of what agents say was the getaway car.

It was blocked in by police as officers converged on the home in Seaford.

The reptiles included alligators and venomous lizards like Gila monsters. They were exotic, dangerous animals that authorities say are illegal to sell or to possess in the state of New York.

"The animals were being removed from the residence," said SPCA president Gary Rogers. "They were placed in the car and then what happened is the Gila monsters got loose and were wandering in the interior of the car. We also took out some small caimans and alligators out of the trunk."

The two arrested are suspected of raising the exotic animals for sale on a lucrative black market. The arrests came shortly after officers raided Reptile Rage, a pet store in Levittown, where a venomous, five foot long monitor lizard was seized.

"They're illegal to have in New York state, they're a danger to the public so that's why they're being removed," said Rogers. "They were dangerous, they've all been removed. We're in the process of finishing up our search right now. We have two individuals that are in custody, one from the house and one from the store."

These kinds of arrests are unusual, but not unheard of.

Last year agents raided a home in Carle Place and seized dozens of snakes, kept in squalid conditions. A 20-year-old man was arrested there on animal cruelty charges.

"God forbid one of the animals got out too, it could have gotten to someone's pet or child," said neighbor Michael Anderson.

The identities of those arrested could not immediately be confirmed. Charges against them have not been announced. But in addition to the animals, agents confiscated several eggs from what they believe were other venomous reptiles.