Immigration rally at Trinity Church kicks off 24 hours of action 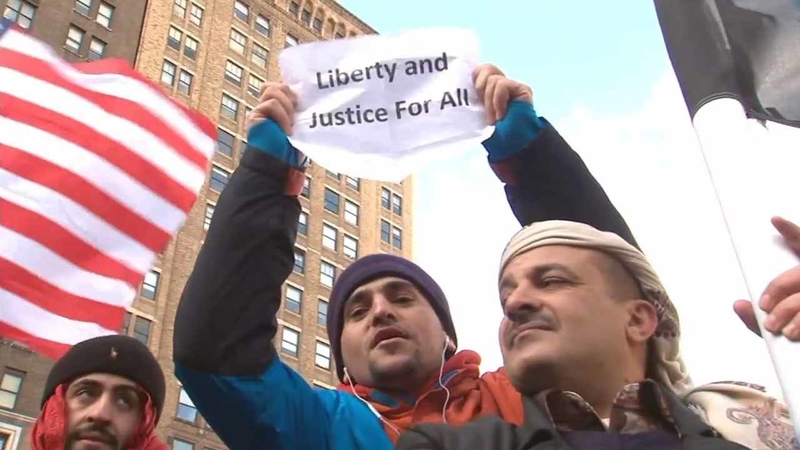 Rally to highlight plight of refugees

The rally began at noon Tuesday in front of a Trump-owned building on Wall Street and continued with a march to Trinity Church, with participants carrying small orange rafts as a symbol of the dangerous journey so many refugees are forced to take.

Protesters say Trump is making that plight much more difficult by restricting immigration and banning refugees desperate for a new home.

The event was organized by a coalition of immigrant and religious groups that declared New York a "city of refuge," and the rally started next to a tent city set up to highlight the plight of refugees across the globe who have fled their countries. Demonstrators plan to camp out overnight, and there will be other events and programs, as well as a vigil.

Ahmed Kargbo, a Marine who fought for this country, fled Sierra Leone almost 30 years ago. And like many of the protesters, America is a home they say needs a new direction.

"We still believe in America, and we still call it home," Kargbo said. "And that's why we're standing up against the ban...I am a Muslim."

ICE officers took Humberto Cantero into custody last month, separating him from his wife and daughters. Now, clergy and community leaders are calling for his release.

"Humberto, we're with you," the crowd shouted outside the US Immigration Detention Facility in Elizabeth.

It's where the father of four has been since he was taken into custody more than a month ago after his car was pulled over by police in Monmouth County. He didn't have a license and his registration was expired, and authorities determined he is in the country illegally.

Cantero's wife spoke, with her four daughters by her side.

"This does not happen to other families, the separation of families," Aracety Cantero said in Spanish. "We are good people who came here to work."

Cantero does not have a criminal record, and supporters say he's been a model resident and father. They blame President Trump's aggressive immigration policies.