After 9,000 miles, man nears goal of walking every block in New York City 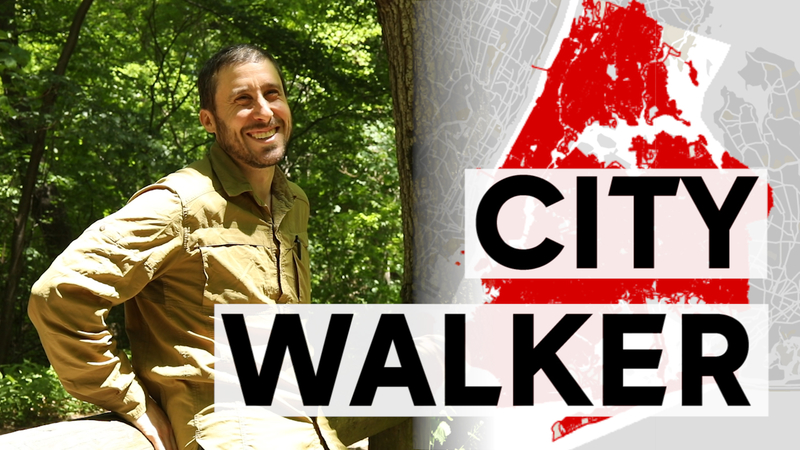 After 9,000 miles, man nears goal of walking every block in New York City

MANHATTAN (WABC) -- After eight years and more than 9,000 miles, Matt Green is just a few hundred miles short of his ultimate goal: to walk every block of every street in the five boroughs of New York City.

"I thought this would take me two and a half years," says Green, 39, who previously walked across the country from Rockaway Beach, New York to Rockaway Beach, Oregon. "It's gone from me just walking every day to spending the vast majority of my time learning about the stuff that I saw on my last walk."

Case in point: over the six miles Eyewitness News spent with Green, he pointed out a shuttered German restaurant from the 1800s, a glacial kettle pond, a hidden cemetery, an abandoned railroad line, and a bridge underpass where a scene from "Goodfellas" was filmed.

The distance Eyewitness News covered with Green amounts to just over one half of one thousandth of one percent of the total distance he's walked in New York.

A former engineer, Green has no apartment and no job. He finds shelter mostly by couch surfing, occasionally earning longer stays when caring for homeowners' cats and plants while they're away. He makes a little money through donations to his blog, imjustwalkin.com, from leading walks and from public speaking. When necessary, he dips into the savings left over from his previous life.

Green's story took a meta twist in 2014 when filmmaker and friend, Jeremy Workman, asked Matt if he could join one day for a stroll.

That footage became a documentary, "The World Before Your Feet", which premiered at South by Southwest last November and has been screening across the country ever since. Executive produced by actor Jesse Eisenberg, the film has garnered critical acclaim - especially from its most important viewer.

"The real heart of it was that someone else created this document of this thing I've been doing, and did it in this way that is so much better than I could ever do, and yet captures so truly what I'm doing," Green says of Workman's film.

But why is he doing it? For Green, the answer is not so simple.

"I don't know why I'm doing this. I've just found myself through my life drawn to people who are doing these crazy things that are equally stupid and amazing. You could call it either and you would be right," he says. "I suspect there's probably a lot of people who, there's something really cool and weird that they want to do with their life and they don't quite do it because they don't know why. I just wanted to see what would happen if I did something because I didn't know why, because I just felt like I should without having a real explanation for it."

Green estimates his walk is 95% complete and that he'll finish the remaining few hundred miles in the coming year or two. True to form, however, he's not holding himself to a deadline. He's just walking.