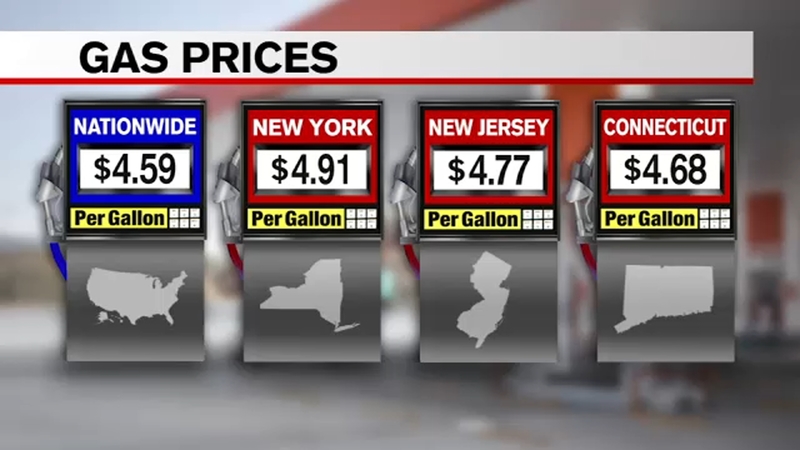 Gas approaching $5 per gallon in NY as record prices persist

NEW YORK, New York -- Drivers are tackling another day of rising gas prices across the Tri-State as the average cost per gallon continues to set new records.

And in New York, gas is quickly approaching an average of $5 per gallon.

New York City cab driver Tarlochan Singh Bhatti drives all the way to Mineola to fuel up to save what he can.

"Because we're really hurting," Bhatti said. "The people who use it every day, every day. We don't fill up once a week, we fill up every day."

Working people who can't increase their fees do what they can to save in other ways.

Avtar Sawhaney delivers pharmaceuticals and tries to lump deliveries together in order to cut down on the cost of fuel. He's paying $108 to fill up.

Gas in the state increased again Thursday, bringing the average cost of regular unleaded fuel to $4.91.

In New Jersey, the average cost is $4.77, with Connecticut following closely behind at $4.68.

The record high gas prices, along with a brutal day on Wall Street, are being fueled by inflation and uncertainty.

Stocks wavered in afternoon trading on Wall Street Thursday as the persistently high inflation continues to weigh on the economy and keeps major indexes mired in a deep slump.

The S&P 500, the benchmark for many index funds, is coming off of its biggest drop in nearly two years. It eased off an early stumble and was down 0.1%. It has fallen roughly 18% from the record high it set early this year. That's just shy of the 20% point that defines a bear market. The last bear market happened just two years ago, following the outset of the virus pandemic.

Experts are mixed on whether we're headed towards a recession.

"Our hope is that we will steer out of it with a gradual fall, maybe," said Doctor Anoop Rai a finance professor at Hofstra University "Very small probability that we'll just smooth sail out of this."

The gas records come as a closely divided House approved legislation Thursday to crack down on alleged price gouging by oil companies.

A bill backed by House Democrats would give President Joe Biden authority to declare an energy emergency that would make it unlawful to increase gasoline and home energy fuel prices in an "excessive" or exploitative manner. The bill directs the Federal Trade Commission to punish companies that engage in price gouging.

"At a time when people across the country are feeling the pinch at the gas pump, Congress needs to be doing all it can to bring down costs for American families, said Rep. Kim Schrier, D-Wash., who co-sponsored the bill.

ALSO READ | Homemade baby formula could be dangerous: What parents can do amid shortage
EMBED More News Videos

She called it "infuriating" that spikes in gas prices were "happening at the same time that gas and oil companies are making record profits and taking advantage of international crises to make a profit. This must stop.

The measure was approved, 217-207. It now goes to the Senate, where a similar bill is pending but faces steep odds amid a 50-50 split between Democrats and Republicans.

Gas prices nationwide hit an average of $4.59 per gallon Thursday, 49 cents a gallon higher than a month ago and $1.55 higher than a year ago, according to AAA.