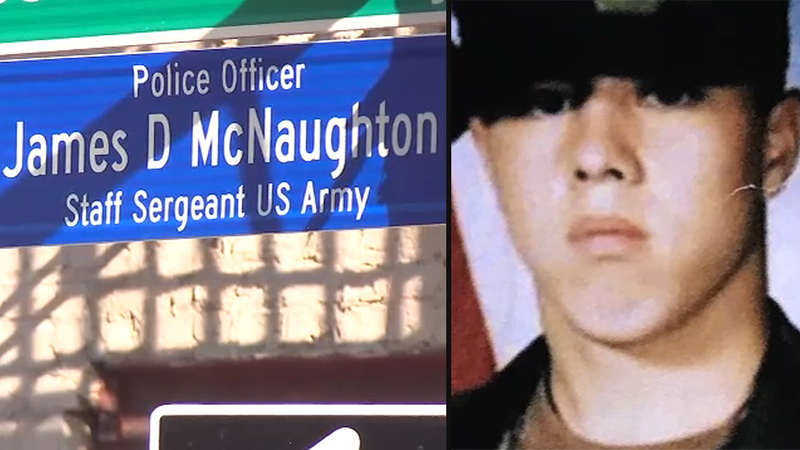 TRIBECA, Manhattan (WABC) -- A street in TriBeCa was co-named after an NYPD officer who worked in the neighborhood before he was killed in Iraq.

Staff Sergeant James McNaughton was 27 years old when he was killed in action in the Iraq war in 2005. He was the first NYPD officer to die in the conflict.

"This city has been absolutely transformed by people like Jimmy," NYPD Commissioner James O'Neill said.

The street - a section of West Broadway between Lispenard and Canal streets - was co-named James McNaughton Way at a ceremony with the officer's family on Thursday.

The street is part of the area McNaughton used to serve as an NYPD officer in the Transit Bureau.

McNaughton's family -- including his parents, who are both retired members of the NYPD -- lobbied for 14 years to have a street in Tribeca dedicated to him.

His parents hope the sign will be a beacon for the neighborhood and the officers who protect it.

"He was the most humorous kid that you ever wanted to meet," mom Michele McNaughton said. "He would come out with things that you'd have to go, 'Wait, what?' So I called them 'Jimmy-isms.'"

And now Jimmy-isms are more profound. The K-9 named for him 10 years ago was at the ceremony, and a new plaque will soon hang by McNaughton's locker at the transit unit.

It is all for the 27-year-old from Centereach who gave so much in such a short amount of time.