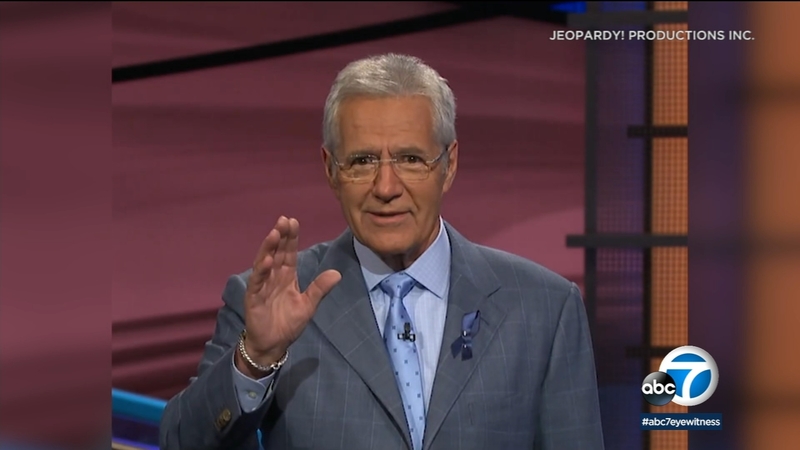 WASHINGTON -- Viewers bid farewell to an icon as Alex Trebek's legendary tenure as the host of "Jeopardy!" has come to an end.

The final episode Trebek taped before his passing aired on this station on Friday, Jan. 8, 2021. Click here to check your local listings to see when "Jeopardy!" airs in your city.

The show has not yet named Trebek's permanent replacement, saying only that a series of interim guest hosts will emcee the program in his absence. Ahead of the final episode, the show shared a tribute video to Trebek. The tribute also ended the broadcast.

Production resumed on Nov. 30 with the first guest host, Ken Jennings. Episodes with Jennings will begin to air the week of Jan. 11.

Executive producer Mike Richards opened the show Monday night with a message to the audience about the legendary host's death.

And he almost didn't play in that tournament.

"I had told 'Jeopardy,' 'Nah, I think I'm done playing. I'm getting a little older and a little slower,'" he said. "And what made me change my mind was just realizing this might be my last chance to do 'Jeopardy' with Alex.".

Additional guest hosts are expected to be named in the coming months, including those other two champs who lost to Jennings.

The final episode was taped in late October, just 10 days before his passing.

"I was just thrilled that we were able to do it one more time with Alex at least," champ Brad Rutter said. "I'd hoped it would be more than once, but unfortunately that's not the way it worked out."

Trebek had hosted "Jeopardy!" since it premiered in syndication in 1984, racking up more than 8,200 episodes over the course of almost 37 seasons.

"Alex believed in the importance of 'Jeopardy!' and always said that he wanted the show to go on after him," Mike Richards, the show's executive producer, said last month. "We will honor Alex's legacy by continuing to produce the game he loved with smart contestants and challenging clues. By bringing in familiar guest hosts for the foreseeable future, our goal is to create a sense of community and continuity for our viewers."

Trebek was in the "Jeopardy!" studio until Oct. 29. He passed away on Nov. 8, 18 months after he was diagnosed with pancreatic cancer.

"Anytime the cameras are rolling, he's typical unflappable Alex," champ James Holzhauer said. "But when the cameras are off, you see just how hard he's battling to get himself into game shape while he's going through all this stuff, and it was amazing to see the battle he was waging to do what he loved at the end of his life."

Trebek's honors include the Guinness World Record for hosting the most episodes of a single game show and seven Daytime Emmys for Outstanding Game Show Host.

The last episode had no final farewell, and no last remarks or special goodbye from the host who did not know he would die less than two weeks after recording his final episode.