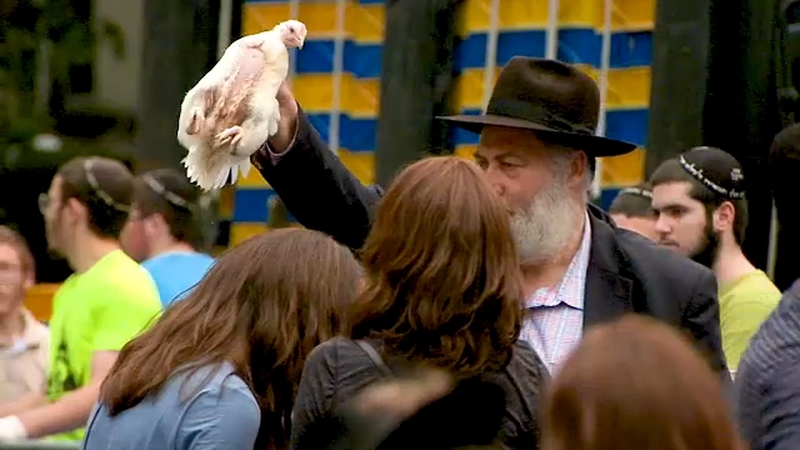 NEW YORK (WABC) -- An ongoing battle over an Ultra-Orthodox Jewish religious ritual performed in the days leading up to Yom Kippur heated up this week as lawyers prepare for oral arguments in a lawsuit headed to the New York Court of Appeals next month.

At issue is whether New York City should be forced to enforce its own health and safety codes and animal cruelty laws even if it impinges on religious freedom.

In 2015, a group of animal rights activists filed a lawsuit in the New York Supreme Court asking the court to compel New York City to enforce more than a dozen health, safety and animal cruelty laws the plaintiffs argue are violated during the ancient ritual known as Kaporos.

Kaporos involves waving a chicken over one's head while reciting a prayer for forgiveness. The chicken is then killed.

Activists said they pulled the chickens from trash bags left on the streets in Brooklyn on Tuesday.

They recorded while recovering some of the chickens still living and left for dead. Activists said two chickens survived even though their throats had been slit. Hundreds of others were also recovered, many with broken bones and missing toes.

"It's heartbreaking," Moss said. "This is animal torture."

Protesters carried dozens of the chickens who did not survive to the NYC Department of Health and Mental Hygiene headquarters in Long Island City and staged a protest during the lunch hour, calling on the Department to enforce health codes, protesters argue are being violated.

"Stop the torture, stop the pain," protesters shouted, "we have no other choice than to bring these victims here to you."

A New York Appellate Court has ruled that the city can use discretion in enforcing the health and safety laws in question and in a statement, a DOH spokesperson wrote, "We have not found Kaporos to be a significant public health threat."

The attorney representing the protesters is appealing that decision in the New York Court of Appeals in Albany. Oral arguments will take place October 17.

"This is not about the concern of chickens" said Rabbi Shea Hecht, Chairman of the National Committee for the Furtherance of Jewish Education. "This is about concern of human beings who are doing a service who are observing a religion that others do not like."

Hecht's organization sponsors some of the Kaporos events in New York City.

Hecht said he feels persecuted by protesters who have interrupted a religious service in the name of chicken's rights year after year.

"To think that I who am doing a ritual because of my dedication to God, that I am not concerned about a creation of God is simply an oxymoron," Hecht said.

"Of course I'm concerned about what they are saying," Hecht said regarding the protesters arguments about animal cruelty. "They can come to my office and we can talk about. I think, 'shame on you,' if the only time you have to protest something that I'm doing that you think is cruel is on the eve of Yom Kippur when I am actually doing my service. You should show that respect even if you don't understand it or you have a different opinion."

The U.S. Supreme Court has said that animal sacrifice for religious purposes is protected by the constitution.

This lawsuit heading to the New York Court of Appeals next month is a bit different in that it asks whether New York City must enforce health codes and animal cruelty laws already in place.

A spokesperson with the New York Police Department said the department is waiting on that court's decision to guide their enforcement.