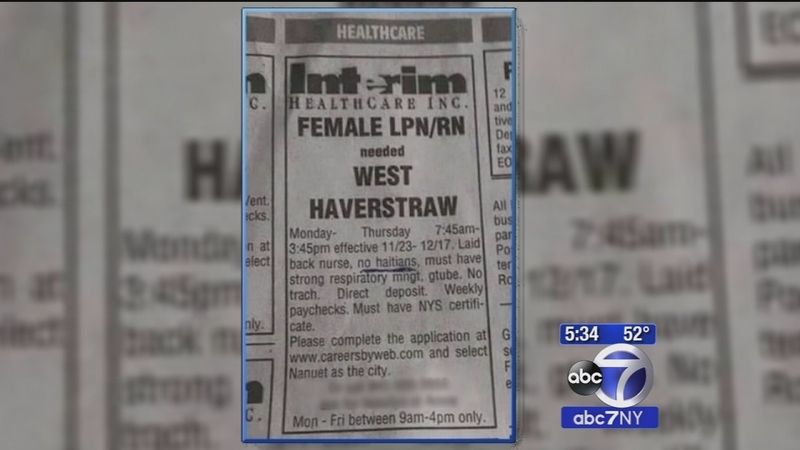 SPRING VALLEY (WABC) -- Interim Healthcare has issued a statement after a "help wanted" advertisement in the Rockland County Pennysaver specified "No Haitians."

The community was in an uproar over the ad, setting off an online firestorm and prompting state Senator David Carlucci to call for action to be taken against the Pennysaver and the advertiser.

She said the company has hired an independent third party to conduct a review of what happened.

Here is the full text of the statement:

"We value the diversity of our patients and our employees. The ad in the Pennysaver for an LPN is totally unacceptable and is offensive to us, and we know to all of you. I can assure you that we take this seriously. We have engaged an independent third party to conduct a comprehensive review of what occurred. All policies and procedures will be reviewed to assure that it will never happen again. We have already taken action and will continue to do so. Please accept our sincere apology. In particular, we apologize to the entire Haitian community."

State and federal laws prohibit an employer from refusing a potential candidate on the basis of race gender or ethnicity, so even as the apologies roll in, officials and the Haitian community aren't taking the situation lightly and are demanding answers.

Carlucci held a news conference with Haitian leaders Monday demanding a full investigation and calling it a direct violation of civil rights. Assemblywoman Michaelle Solages, of Elmont, is the first Haitian-American elected to the New York State Legislature. She says it not only disrespectful to Haitians, but the entire medical community.

"If you look at doctors, you look at nurses, you look at radiologists, many of them are Haitian-American," she said. "So to exclude a type of individual is ridiculous. It's like excluding someone because they're left handed."

The Rockland Pennysaver has also apologized, but clearly, the story doesn't end there.