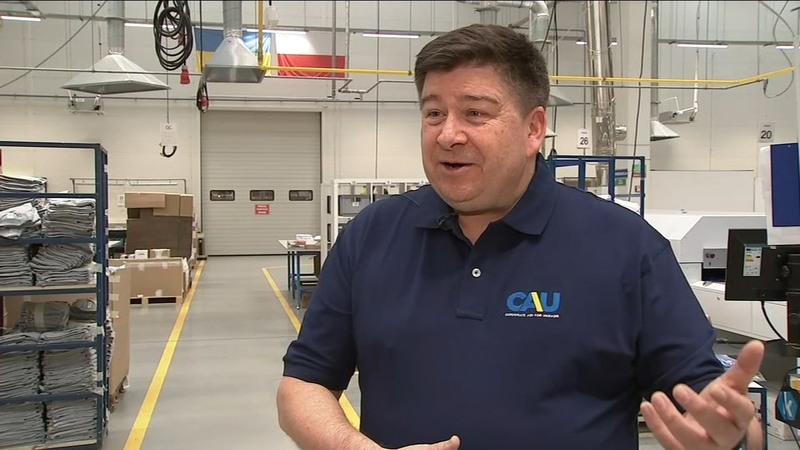 KRAKOW, Poland (WABC) -- The Russian invasion has been catastrophic for the people of Ukraine, with millions displaced and most of them leaving the country.

The majority went to Poland, where they have tried to find housing -- and work.

Eyewitness News reporter Josh Einiger is in Poland, reporting on a T-shirt factory that manufactures global brands and is owned by a man originally from New Jersey.

Entrepreneur John Lynch, who coincidentally graduated from Sayreville High School with Jon Bon Jovi, has given jobs to dozens of refugees.

HOW TO HELP | Here's how to donate, help Ukraine amid Russian attacks
EMBED More News Videos

You don't need to speak Ukrainian to understand heartache, don't need a translator to hear to the abject sorrow.

Olana and Natalia are among countless Ukrainian women forced to make impossible choices, gathering their kids but abandoning everyone else and everything else in their lives, to flee the bloodshed in the place they call home.

"They had a normal life a months ago," Lynch said. "Their husbands and sons and fathers are walking around with AK-47s, defending their country, and they're here every single day wondering if they're safe."

As a young businessman, he invested in a post-Cold War Poland building a company called Lynka, which would became one of Europe's largest T-shirt printing factories.

The stability he helped build is under a new threat from Vladimir Putin, who is cutting off the flow of Russian oil into Poland in retaliation for its military assistance to Ukraine.

Poland insists its supply is stable, though gas prices, like in the U.S., are already sky high.

"In the first two weeks, I found myself breaking into tears three, four times a day," Lynch said.

But the future of his adopted home is the last thing on his mind.

"I said I have to do something here," he said. "I have to help these people."

He already had hundreds of employees, but in the last month, he has hired 50 more -- all of them Ukrainian refugees.

That includes Olana, who left her floral design business in Kiev when her daughter was almost killed in a Russian airstrike.

She now has a new job, and new stability, in a terrifying time.

"I want to say thank you to all the people who help me in Poland," she said through a translator. "It gives me strength to live here."

You can also help support the humanitarian effort by visiting the Corporate Aid for Ukraine website.