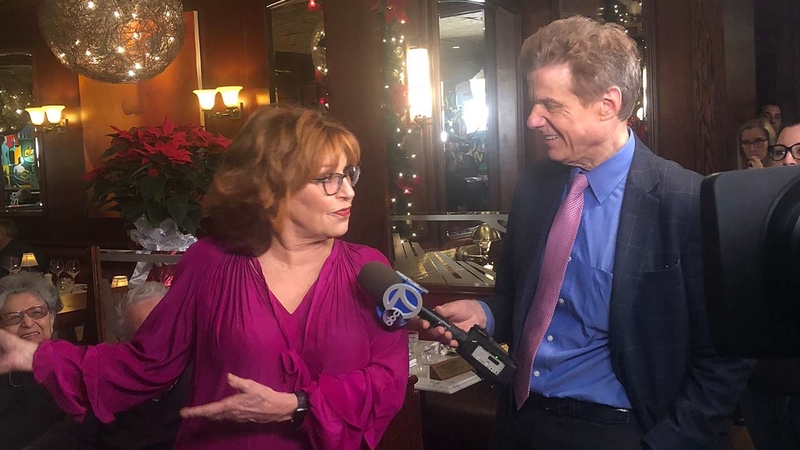 UPPER WEST SIDE, Manhattan (WABC) -- It was billed as a celebration of "20 Years of Joy," a toast to the tenure of Joy Behar on "The View," and her colleagues on the show were not going to let the occasion pass without paying her tribute.

A trip down memory lane brought back plenty of memories, and Behar explained her part in the show's success.

"You have to cut through the seriousness of a conversation," she said. "I think that's my role. It was my role in the family when Aunt Rose would yell at Uncle Joe and my mother and father would start fighting, I'd just say something to cut, cut the tension."

Behar is the last of the original hosts to remain at the table of "The View." She took a break a few years back, but Behar's been one of the keys to the show's continuity -- not too bad for a personality who didn't get serious about show business until she was 39 years old.

"I was fired from 'Good Morning America' because I was one of the more hostile receptionists they ever had," Behar said. "I had a near-death experience and I got a divorce all in the course of about two or three years, so I said just, 'Do it now, go for it.' And then I did."

There was a surprise for Behar at Café Fiorello on the Upper West Side, where friends Alan Alda and Regis Philbin unveiled a plaque to mark her 20 years as co-host.

Following the show, she joined her old pals and, given the fact Behar got her start as a comic, lunch was naturally lighthearted.

Alda said they laugh a lot because Behar sees the world in a cockeyed way.

"Nobody's writing it for her," Philbin said. "She knows where the laugh is and she goes for it. And she gets it."

So how does Behar look at her two decades in the limelight?