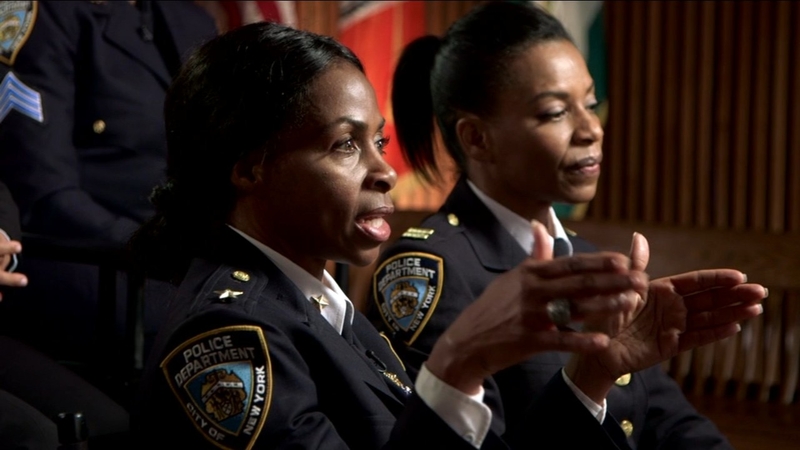 NEW YORK CITY (WABC) -- A 33-year NYPD veteran is continuing to blaze trails as she takes over as the new chief of collaborative policing.

Assistant Chief Juanita Holmes, who used to be in charge of the School Safety Division, is now tasked with fostering partnerships with people, government agencies, and community-based organizations. She is one of the highest ranked African-American women in the department.

Holmes has 16 immediate family members who are employed by the NYPD with 14 of them serving in the uniformed ranks including her son, a brother, five sisters, two nieces and a nephew.

She views public safety as a ecosystem, and in her new role, she will dive deep into forming new partnerships between police and the community, working to improve the department's customer service.

"Right no, we really need a lot of healing in the city," she said. "We speak about building bridges. I think bridges have been built already. I think now, we have to look at things differently, and it's not just the police department...we need your input."

The chief considers herself an innovative thinker and a role model.

The two-star chief still has her eyes on the prize -- top cop in the city.

"Looking at my wonderful Commissioner (Dermot) Shea now and all that he's met with, challenges I can plainly say, yes, I still would never turn that opportunity down," she said.

As Chief of Collaborative Policing, Holmes joins Chief of Community Affairs Jeffrey Maddrey and Deputy Commissioner of Community Partnerships Chauncey Parker in fulfilling the mission envisioned by Shea from his first moments in leading the department.

To carry out her new duties, the chief will draw on her experience as a leader within the Police Department as well as her invaluable understanding of the way police officers best serve the city's communities and the way the agency works with its many law enforcement and government partners.

"The people of the city want the police to do the right thing, and the people of the city also want to feel safe," Holmes said. "As I embrace this important new job, I am committed to achieving a balance in our mission of bringing about healing for the community as well as support and resources for the hardworking men and women of the Police Department."

Holmes joined the NYPD in July 1987 and began her career on patrol in the 101 Precinct.

She has served in the 81, 100, 101, 103, 111, and 113 Precincts, as well as Police Service Areas 2 and 8, the Patrol Borough Bronx Investigations Unit, Housing Borough Bronx/Queens, the Office of the Deputy Commissioner of Training, the Domestic Violence Unit, and the School Safety Division.

On September 16, 2016, Holmes became the first African American woman to serve as Borough Commander in Queens North. She has also served as Commanding Officer of the Domestic Violence Unit, the Office of the Deputy Commissioner of Training, Police Service Area 2 and the 81 Precinct.

She also served as the Executive Officer of the 100 and 103 Precincts.

Holmes holds a Bachelor of Science degree in Biology from St. Joseph's College and is a graduate of the Police Management Institute.

She retired in December 2018 to join the private sector as Global Head of Corporate Security at BNY Mellon, rejoining the department on December 31, 2019.

"New Year's Eve is very special to me," she said. "It's like out with the old in with the new."