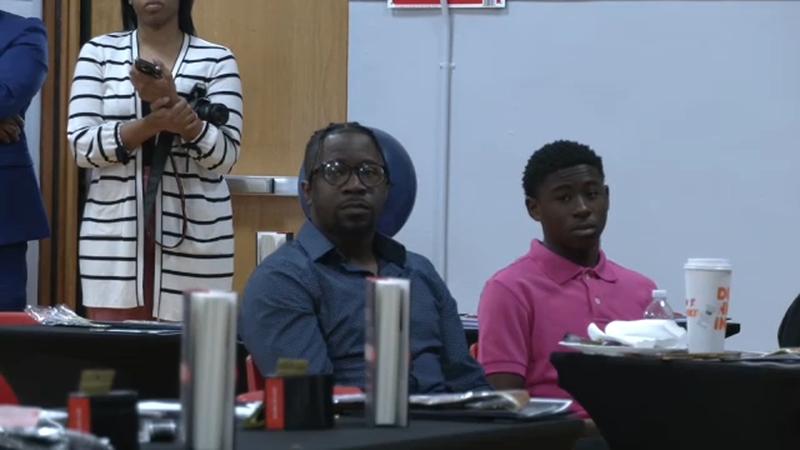 EAST ORANGE, New Jersey (WABC) -- This year, Juneteenth and Father's Day fall on the same day making it an especially meaningful day for some.

"There is so much hurt surrounding fatherhood, especially in the Black community," said William Swanson, a father.

He and his son Kameron hope to break down stereotypes about Black fathers.

"We are here, we are active, we do our best, we are doing great work," he said.

He attended a wellness workshop in East Orange meant to uplift dads and sons just in time for Father's Day.

For some, the double holiday gives new meaning to what Black fatherhood means in 2022.

"It's not the same struggle," Swanson said. "The difference is having a different level of education and the ability to educate him at a higher level so he can go as far as he can."

According to Dr. Lena Green, executive director of the Hope Center, society expects Black fathers to be absent -- a narrative she says stems from forced family separation during slavery.

"There's a myth that I think that has been quite pervasive, that Black fathers are actually not present," she said. "That couldn't be anything further from the truth."

The number of Black and Brown fathers Dr. Green has seen at the Hope Mental Health Center in Harlem has tripled over the last few years.

They are often marginalized fathers looking to heal.

"Dads very much want to be present," she said.

The same could be said for newly freed Black fathers, according to the Reverend Mark Tyler, of the Mother Bethel AME Church in Philadelphia.

The Mother Bethel AME Church has a collection of newspaper ads in which freed Black fathers desperately searched for wives and children.

"It absolutely defies everything that we have been told repeatedly about Black men not caring for their families," Rev. Tyler said.

Back in East Orange, it's hard to choose what Kameron appreciates most about his dad.

"I'm going to say everything," Kameron said. "But the thing I admire most about him is his thirst for knowledge."

They are learning and growing together, shattering misrepresentations along the way.

Father's Day is fast approaching, and a Retail Me Not survey indicates 4 in 10 simply want a day spent with family.