CHICAGO -- ABC News has obtained the $3,500 check that was apparently written by "Empire" actor Jussie Smollett to one of the two brothers who Chicago police said helped stage an attack on Smollett last month. 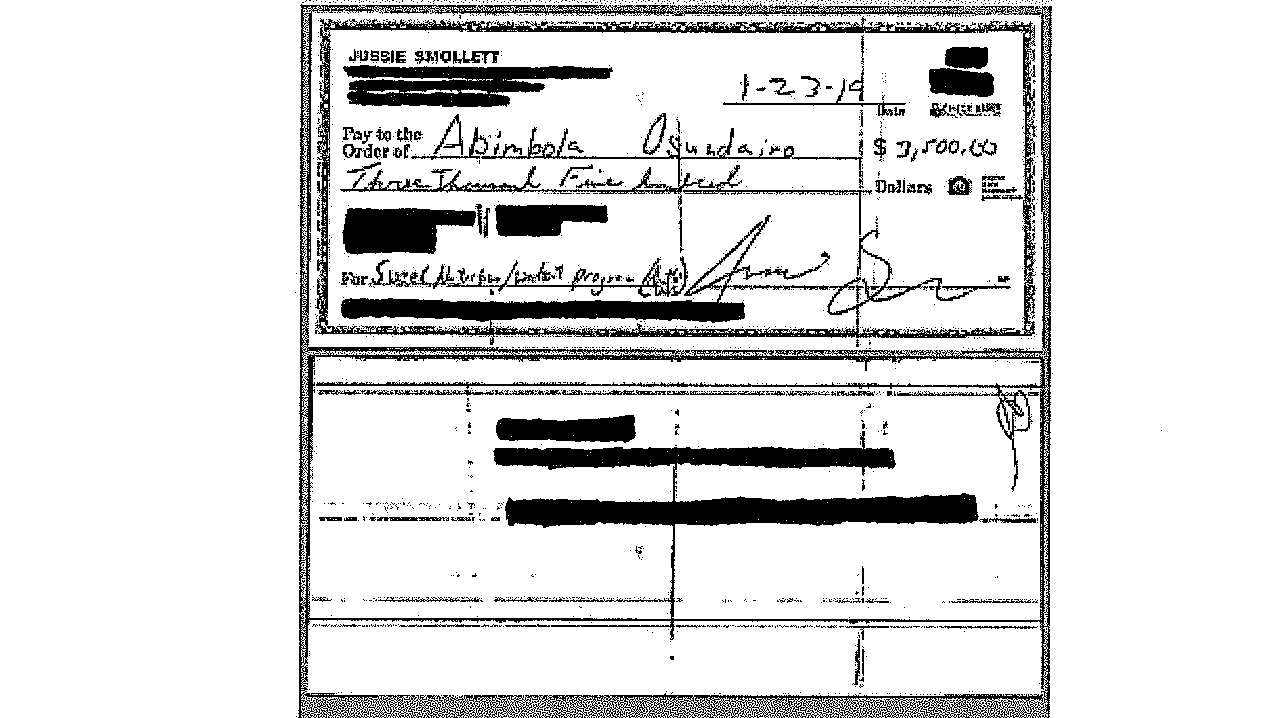 A copy of a check obtained by ABC News apparently written by Jussie Smollett.

The check was dated Jan. 23, six days before Smollett was accused of staging the attack. The music video was scheduled to be filmed Feb. 23, according to a calendar entry of Smollett's obtained by ABC News.

ABC News has also obtained text messages between Smollett and one of the Osundairo brothers.

A judge decided Monday to allow Smollett to travel to California and New York. The actor did not appear in court Monday. Only his attorneys were present.

Police and prosecutors have accused Smollett of paying two brothers to yell homophobic and racial slurs and rough him up in the Streeterville neighborhood near his apartment.

Chicago Police Superintendent Eddie Johnson said Smollett's motive was that he was "dissatisfied with his salary." He sat down Monday with Robin Roberts on "Good Morning America", where he said the story didn't add up.

Howard posted video of Smollett holding a baby boy on his Instagram account, saying in part, "All your lil homies got you."

Smollett is due back in court March 14, when he will enter his plea. If Smollett is eventually convicted of the charge, he could face up to three years in prison. He could also face substantial fines.
Report a correction or typo
Related topics:
chicagostreetervilledisorderly conductcelebrityattacktelevisionu.s. & worldfalse reportinvestigationchicago police department
Copyright © 2022 WABC-TV. All Rights Reserved.
RELATED
CPD Supt. Johnson discusses Smollett case on GMA
TOP STORIES
Exclusive: Man frustrated after house set on fire by illegal fireworks
Highland Park parade shooter charged with 7 counts of murder
What we know about 7 victims of July 4th parade shooting
Highland Park 4th of July parade shooting survivors speak out
2 officers injured during attempted robbery at cellphone store in NYC
Masbia Soup Kitchen rescues produce from farmers markets
AccuWeather: Sunny and Warm
Show More
Woman found stabbed to death in bed inside Bronx apartment
3 dead, 24 wounded in July 4, overnight shootings across NYC
76 million-year-old dinosaur skeleton to be auctioned in NYC
Suspects wanted in burglary spree targeting schools in NJ
What to know if your flight gets canceled or delayed
More TOP STORIES News