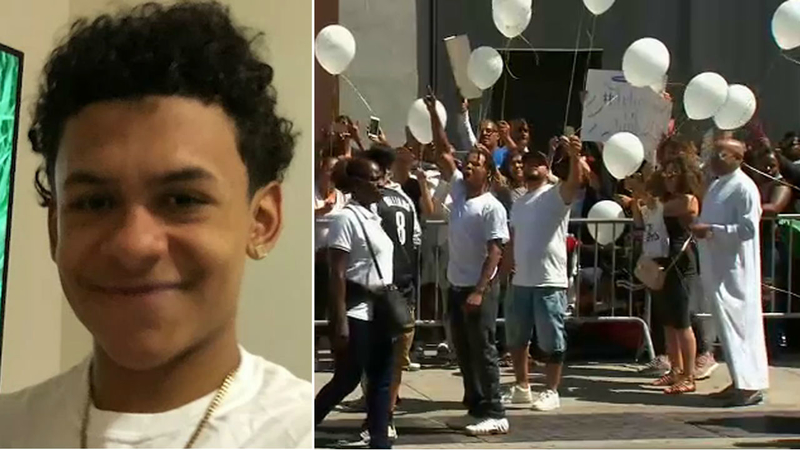 TREMONT, Bronx (WABC) -- Friends, family and neighbors gathered in the Bronx for a second day Tuesday to honor and remember an innocent 15-year-old boy who was brutally killed last week in what is believed to be a case of mistaken identity.

That's no comfort to the parents of Lesandro Guzman-Feliz, known to many as Junior, who are now desperate for justice for their son.

Leandra Feliz and Lesandro Guzman spoke outside the Ortiz Funeral Home in the Bronx on Monday after the first of two wakes, where a line of mourners gathered to say goodbye to their son.

A group of attackers used machetes to slash and stab the teen last week outside a bodega in the Tremont section. Eight suspects are now facing charges.

Mayor Bill de Blasio was among those attending the wake Tuesday night, as mourners continued to line up around the block.

Attendees have been waiting to pay respects to the victim's family.

"(He) wanted to be a detective," she said. "Not just a police officer, a detective. It has rank."

Police Commissioner James O'Neill made it a point to pay his respects to the family. Many others, with some moved to tears, felt it was important to show support for the family by standing in line for up to four hours.

Mourners will bid a final farewell Wednesday when funeral services are held at Our Lady of Mount Carmel Church in the Belmont section.

Not far from the somber scene at the funeral home was the arraignment for the 19-year-old who was the first suspect charged with Junior's murder. Kevin Alvarez was met with an angry crowd as he emerged from the 48th Precinct following his arrest Sunday night.

Security cameras outside the bodega captured the gruesome murder.

"They did him like an animal, and the people who did this, in my opinion, today, should not get justice at all," mourner Kenneth Kelly said. "They should be sentenced to life without parole."