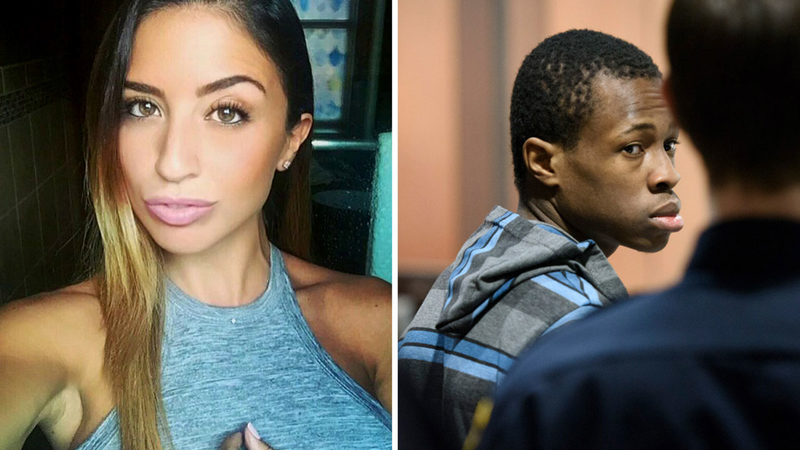 KEW GARDENS, Queens (WABC) -- Chanel Lewis was sentenced Tuesday to life in prison without the possibility of parole for murdering Karina Vetrano while she was jogging in Queens in 2016.

The sentence was handed down after impact statements from Vetrano's family members.

"That monster killed four people the night of August 2," father Phil Vetrano said. "One is in heaven. The other three walk the earth as zombies, just waiting to die to be with Karina again. There is no more pleasure in life."
EMBED More News Videos

Phil Vetrano expresses his grief in a statement to the judge

"Chanel Lewis slaughtered me as well with the gruesome slaying of my soul," mom Cathie Vetrano said while clutching a pair of her daughter's white work shoes. "The second you put your hands on a child of God, you rejected the Holy Spirit and acted out as the devil...Repulsive are you. You left her in a hiding place, and like a snake, you slithered into the night with your secrets and lies."

Lewis spoke only briefly, to deny that he was responsible for the murder.

"This is a lose lose situation for both families," he said before rendering the sentence. "Parents worst nightmare, child goes out for a jog and never returns. In the future, you'll find that the followers of this case would have moved on and you will be alone, but I tell you what, when that day come around, you'll be in a cage."

The 22-year-old Lewis was arrested six months after the murder, in February 2017. A detective involved in the investigation and Howard Beach resident, John Russo, remembered calling police on Lewis in May 2016 for allegedly lurking in the area. After Lewis consented to a DNA swab, investigators said it matched a mixer found on Karina Vetrano.

Lewis' defense team with the Legal Aid Society made at least two attempts to get a new trial -- an anonymous letter was mailed to them by an alleged law enforcement officer before closing arguments claiming prosecutorial misconduct, and a juror claimed alleged misconduct during deliberations.

Both motions by the defense were rejected.

"While there is no denying that Karina Vetrano's death is tragic and that her family and friends suffered a great loss, every aspect of this case -- from the police investigation to jury deliberations -- was propelled by a desire to convict at all costs," the Legal Aid Society said in a statement after sentencing. "This was done without any concern for Mr. Lewis's Constitutional rights to due process and a fair trial. We will appeal this case to the Appellate Division to secure Mr. Lewis the justice that he deserves."


The verdict depended on whether the jury believed Lewis' two videotaped confessions and accepted the DNA evidence found on Vetrano's cellphone, her fingernails and her neck, but nowhere else. The jury in the first trial was unable to reach a unanimous verdict, as five of the 12 jurors felt that prosecutors didn't make the case after the defense argued that the videotaped confession was coerced and raised questions about how police collected DNA evidence.

The sentencing was postponed last week because of the allegations of juror misconduct, but the judge denied a defense request to throw out the verdict after hearing arguments Monday.

Juror Christopher Gooley testified about three possible incidents of juror misconduct during the case, but prosecutors claimed Gooley was simply seeking his 15 minutes of fame.

The jury deliberated for only five hours before reaching their verdict, which foreman Brian Morrissey told Eyewitness News was "a slam dunk."