Incoming NYC Police Commissioner Sewell on GMA: "We have to stop the violence immediately" 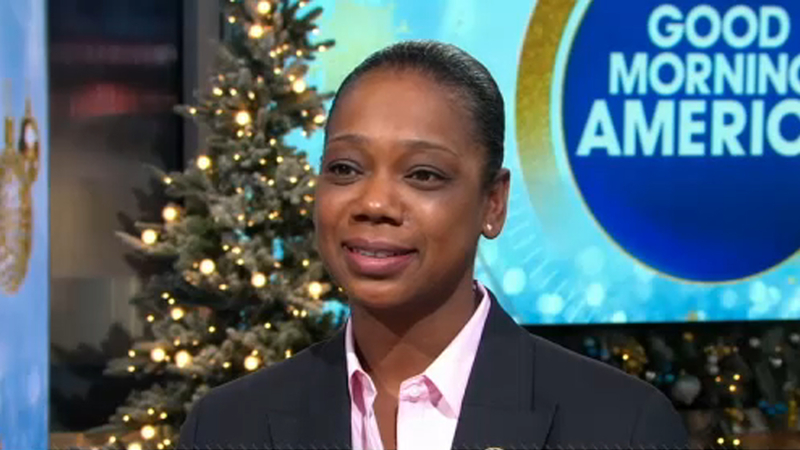 Sewell on GMA: "We have to stop the violence immediately"

During an interview with Robin Roberts on Good Morning America Thursday, Sewell said the situation was "unacceptable."

"I'm going to get into the NYPD and find out what they're doing, what works and what doesn't, and try to put some initiatives in place very quickly to quell the violence," Sewell said.

Sewell said communication between police and the public would be key.

"When you try to figure out what is the issue, what are they feeling if they're feeling as if they're not being listened to or heard or understood, I think how we balance that is putting them together and talking to one another," Sewell said.

Sewell said her appointment was "overwhelming, it is monumental, but I believe I'm prepared for this moment."

The 49-year-old will be the first woman police commissioner of the department.

She was introduced by Mayor-elect Eric Adams during a news conference on Wednesday.

"I bring a different perspective to make sure the department looks like the city it serves," she said.

Adams had long said the next police commissioner would be a woman, but Sewell was a surprise choice.

"This is the personification of emotional intelligence," Adams said of Sewell. "Commissioner Sewell's appointment is a powerful message to girls and young women across the city - there is no ceiling to your ambition."
EMBED More News Videos

She beat out other candidates with more experience leading large departments like Philadelphia and Seattle.

"She exudes what it means to be emotionally intelligent, calm, collected, confident," Adams said.

Sewell promised to break down barriers between the community and police and said, "policing is about people."

She said that she is laser-focused on guns and getting them out of the hands of criminals.

She said that "plain-clothes units and anti-crime units work" and she is ready to look at what is being done in the department. She said that the right people with the right temperament need to be chosen to work in those departments.

Sewell is the long-running chief of detectives in Nassau County. She's now leaving that post supervising hundreds of detectives for a major promotion to lead a force of 36,000 come January 1.

"Scaling up the skills you need to lead, you can scale up," Adams said. "We need to think differently and the skills that Chief Sewell, who will be the chief of the department, the skills that she has, everywhere that she traveled to in the police department in Nassau she improved."

Derick Waller reports on the expected announcement of the next NYC police commissioner.

She was promoted to the position on September 11, 2020, becoming the first African American woman appointed to chief of detectives.

Sewell clearly did well in the interview process which culminated with a mock press conference. The scenario was a white cop who had shot an unarmed Black man.

Adams said the goal of the mock press conference was to see if the media could shake her and rattle her, and he found her to be very composed. He wants the people of the City of New York to feel secure under her leadership.

PBA President Pat Lynch released a statement saying, "New York City police officers have passed our breaking point. We need to fix that break in order to get our police department and our city back on course. We look forward to working with her to accomplish that goal."

The head of the detectives union added, "It's no surprise to this union that the new police commissioner is Nassau County's current chief of detectives, and we have no doubt Chief Sewell knows how hard our members work."

The official announcement happened Wednesday morning at the Queensbridge Houses where Chief Sewell grew up.

"To all the little girls within the sound of my voice there is nothing you can't do and no one you can't become," Sewell said. "It is said the NYPD is the best of the best. We're about to get even better."

"My shoes are laced up, I'm ready to get to work," she added.

Sewell is a 22-year veteran of the force and was a longtime member of the hostage negotiations team.

She was also a graduate of the FBI National Academy.

The announcement came just days after Adams selected David Banks for the position of chancellor of the New York City Department of Education.

Dave Evans ahs the latest on NYC Mayor-elect Eric Adams announcing the first major appointee to his administration this morning.