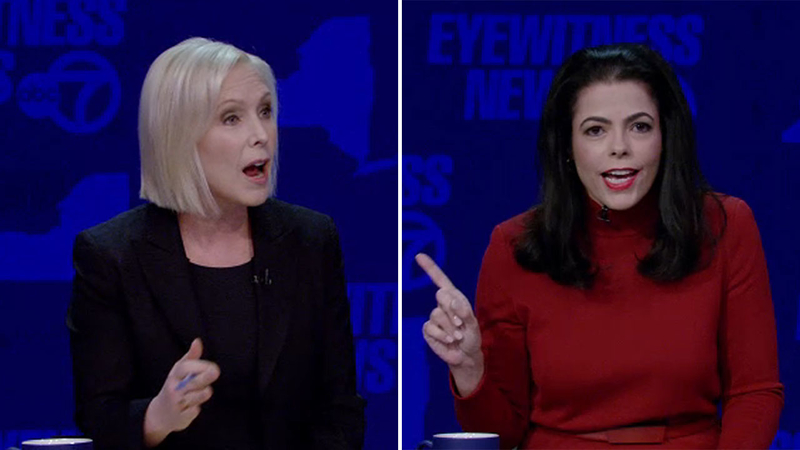 Hosted by Eyewitness News anchor Bill Ritter, the debate will also air during the station's weekly political flagship show "Up Close with Bill Ritter" on Sunday, Oct. 28 at 11:00 a.m. EDT.

The headline of the debate, like so much in American politics today, was about President Donald Trump and his two years in office.

Farley called that an unfair generalization.

"Look, I am asked about this president all the time," she said. "I voted for him. I support the president when his policies are good for New York."

The candidates clashed on immigration, whether ICE should be abolished, and the massive migrant caravan moving slowly through Mexico.

"People are calling it a caravan, I call it an invasion," Farley said. "We can't allow open borders."

"I do not support open borders, and neither do Democrats," Gillibrand countered. "What we have in this country is an immigration crisis. You have people in this caravan to seek asylum in this country. Immigration has always been a strength in this country. We are a country founded by immigrants. So we need to fix our broken immigration system. Separating children from their parents at the border is immoral, that's what this president has done."

They disagreed on medicare for all and the new tax bill, with Gillibrand saying she supports improving the health care system, including expanding Medicare.

"I believe people should have access to the life-saving health care that they need," she said. "So I believe in Medicare for all, because if you have a not-for-profit public option, if you had a system where you could have access to the healthcare that you need, you would have the ability to have preventive care and people with pre-existing conditions would be able to get the coverage they want."

Farley argued that health care costs are spiraling out of control and that Gillibrand's proposals amount to socialized medicine.

"What she is proposing means that no one will be allowed to have employer health care," Farley said. "If you like your health care, will you be able to keep it? The answer is no."

They also clashed over whether Brett Kavanaugh should have been approved to the Supreme Court.

"I would have voted for him, but most importantly, I would have met with him," Farley said. "Senator Gillibrand didn't meet with him all. She even admitted she never read any of his opinions at all...That is your job."

"I read his opinions," Gillibrand responded. "Unfortunately, my opponent has the same relationship with the facts as President Trump does, who she supports."

Gillibrand is seen by many as a possible presidential candidate in 2020, but she said she won't be running. Farley countered that she did not believe Gillibrand.

"Honestly, I don't believe that, considering this is the third day she's been in New York in the entire month," she said. "When she's been in five other states, including New Hampshire in this month."

The debate opened with a discussion on the recent bomb scares targeting prominent Democrats, including the Clintons and Obamas, and their supporters.

"I believe we need a role model in the White House," Gillibrand said. "I don't believe this president has done that. He's unfortunately been divisive and really put hate into the climate."

"This is an act of terrorism," Farley responded. "It's got to stop. But my opponent, Senator Gillibrand, wants to abolish ICE, which since 9/11 is the group primarily responsible for stopping terror."

Gillibrand has served in the Senate since 2009 after President Barack Obama nominated Hillary Clinton as secretary of state.

Farley is a leader in the financial services industry, working at UBS Capital, Goldman Sachs, and Mistral Capital International. She has never held public office but did serve as New York City finance chairwoman for the state Republican Party.