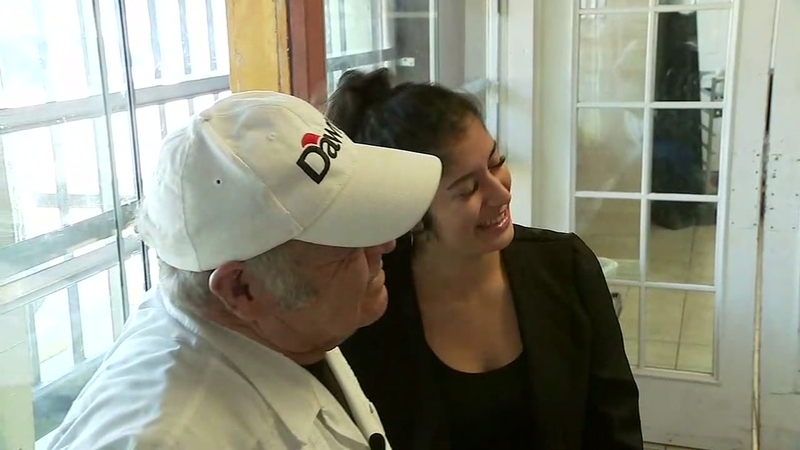 HOUSTON, Texas -- The power of social media is drumming up lots of work for a long time bakery owner. His daughter was worried about her father's business so she went online asking for people to stop by the bakery.

La Casa Bakery and Cafe didn't flood from Harvey, but it cut back on customers. Owner Trinidad Garza was about to sell it, ending the dream of having his own business.

Two days ago, Jackie Garza posted a video of her father preparing pan dulce from scratch, and an appeal.

"My dad has a little panaderia," she wrote. "He's been thinking about closing but I can't let that happen. Spread the word. One retweet could bring in a potential customer."

HEY YALL MY DAD HAS A LITTLE PANADERIA/ RESTAURANT. HE MAKES ALL OF THE PAN DULCE HIMSELF. HE BEEN THINKING ABOUT CLOSING BUT I CANT LET THAT HAPPEN, SPRED THE WORD 1 RT COULD BRING IN A POTENTIAL CUSTOMER! LA CASA BAKERY AND CAFE 1002 HOGAN STREET 77009!! 😭😭 pic.twitter.com/cc2fEDwuyB

Trinidad Garza is in his early 70s and he's been baking since he was 12 years old. He immigrated to the US decades ago, and worked for years in the refrigeration industry. Baking remained his passion, and for years, he dreamed of having his own neighborhood cafe. He opened one with his brothers, but with a growing family, he sold that restaurant. Two years ago, he opened La Casa Bakery and Cafe on Hogan Street, just north of downtown.

"He told my mom he was thinking about selling, and he even had an offer," said Jackie. "I begged him not to sell, to wait for me to get through college and then make me a part owner."

Garza prides himself in making all his baked goods from scratch.

"I know all the hard work my parents put into this. They work from early in the morning until late at night, even though we close at 5 p.m," Jackie said. "The quality of the food and the authenticity of it is amazing."

What broke her heart is when her father had to throw out the bread and cookies he spent hours preparing, because there weren't enough customers to buy them.

Jackie is an 18-year-old senior at Heights High School, who plans to major in business and restaurant management in college. Social media is second nature to her, and she decided to see if she could save her restaurant through Twitter. The one retweet she requested became 60,000 in less than 48 hours and it continues to grow, and by this afternoon, she said the post had four million impressions.

Update: told my dad about all the support he's been getting. He got excited so we're stocking up!! 😩🤧@restaurantdepot pic.twitter.com/81N4LgldNX

"I've had messages from Japan, Australia and Europe," she said.

La Casa also got new customers, with what Garza said were packed mornings this weekend.

He's also very proud of his daughter, and he thinks she's more than capable of taking over the family business one day. She already works at the cafe on weekends, along with her three brothers and her mother.