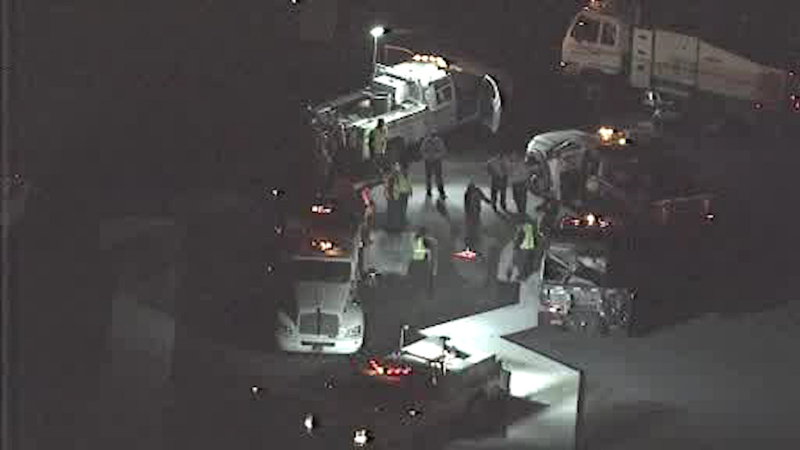 NEW YORK (WABC) -- Flights at LaGuardia are running on schedule with no residual effects from Wednesday's emergency runway repair.

But questions still linger as to what caused this to happen.

"You had a failure in the runway that caused, not a pothole, 8 foot by 2 foot is a gulch," said J.P. Tristani, an Aviation Consultant.

Tristani, a consultant with more than 43 years in military and commercial aviation and more than 30,000 hours of flying time, sees this runway emergency as very rare.

At one of the busiest times of the day, a pilot radioed the tower to report debris on runway 13.

"Do you have enough room to depart?" ATC asked.

"We'll be good with it, but it looks like a piece of concrete off the number 3 on the runway has completely blown off," the pilot said.

"There was a real worst case scenario ready to happen," Tristani said.

The runway was immediately shutdown backing up flights for hours and ultimately canceling other flights.

The Port Authority says work crews spent several hours making the repair in the vital runway, and Tristani is left with questions.

"Does the Port of Authority sweep the runways on a scheduled time basis? And do they also, due to inclement weather or any time, do an unscheduled sweep?" Tristani said.

Eyewitness News posed these questions to the Port Authority.

"At any point in time you could be causing a serious consequence to occur with an aircraft," Tristani said.

He also believes the freeze and thaw during an even mild winter like we've had can create a problem and the need to closer inspect runways.

"There had to be indications of it. So again, it's the procedure that counts," Tristani said.

The Port Authority says the damage to the runway was likely caused by the record breaking warmth and jet blast. What broke apart was a protective coating on top of the concrete runway that measured about a half inch deep. They maintain that it was not a pothole.

"Runway inspections are performed at LaGuardia a minimum of three times each day. On Wednesday, the runways were last inspected approximately a half hour prior to a pilot's report of what looked like small pieces of pavement scattered on a portion of the runway surface where pilots position their aircraft for takeoff. Preliminary findings indicate it is likely the suddenly warm weather and jet blast from engines caused a section of epoxy coating used to protect the runway to break up. A decision was then made to close the runway and initiate an emergency repair," the Port Authority said in a statement.
Related topics:
travelnew york citypotholeslaguardia airport
Copyright © 2022 WABC-TV. All Rights Reserved.
RELATED
Pothole in runway caused big delays at LaGuardia Airport
TOP STORIES
Exclusive: Man frustrated after house set on fire by illegal fireworks
Highland Park parade shooter charged with 7 counts of murder
What we know about 7 victims of July 4th parade shooting
Highland Park 4th of July parade shooting survivors speak out
2 officers injured during attempted robbery at cellphone store in NYC
Masbia Soup Kitchen rescues produce from farmers markets
AccuWeather: Sunny and Warm
Show More
Woman found stabbed to death in bed inside Bronx apartment
3 dead, 24 wounded in July 4, overnight shootings across NYC
76 million-year-old dinosaur skeleton to be auctioned in NYC
Suspects wanted in burglary spree targeting schools in NJ
What to know if your flight gets canceled or delayed
More TOP STORIES News