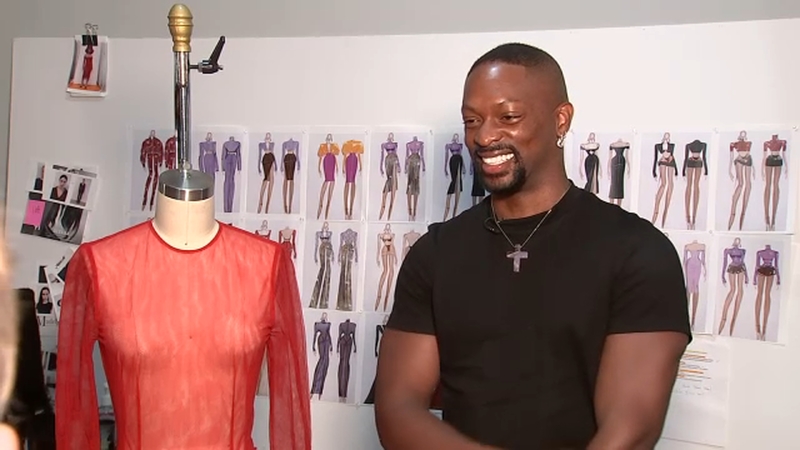 ST. ALBANS, Queens (WABC) -- LaQuan Smith is known for his bold designs that he notes are "all about female empowerment."

I'm no fashion expert, so I rely on my friends at WWD to let me know what's hot and happening on the runways of the world. And there is nobody hotter now than the designer from the St. Albans section of Queens who taught himself how to make clothes.

Smith says one theme runs throughout his line: glamour without apology, and he said this is the perfect time to showcase his designs.

"This is an opportunity and a great time right now to really celebrate sensuality," he said. "You know we've been stuck in the house wearing our pajamas and our terry cloth. Now it's time to reveal the body."

The TV comedy "Black-ish" made Anthony Anderson a star, but he's become even more famous as one half of a comedy team on "To Tell The Truth."

And that is exactly what happened at his recent show during Fashion Week.

"He's like the talk of the town," said Alex Badia, who is WWD's Style Director.

Badia noted the buzz began last fall during Smith's show at the Observation Deck near the top of the Empire State Building.

"He was the first designer ever to show there," Badia said. "It's not easy to show at the top of the Empire State Building. Nothing gets more New York than that."

Born and raised in Queens, Smith taps the soul of New York City for his designs.

"The gritty city, the ripping and running, the edginess of the city," he said.

Given his current success, it was a surprise to learn this man who is one of the city's hottest designers was rejected by the schools where fashionistas have traditionally learned their craft.

"I'm self taught," he said, noting that his grandmother taught him "how to sew and how to construct patterns."

He grew up watching awards shows with his mom, paying particular attention to the red carpet arrivals where he'd say excitedly about a fine dress, "That's the kind of thing I want to make!"

It was a famous green Versace dress worn by Jennifer Lopez to the Grammys in 2000 that directly inspired him to become a designer.

Now, he is meeting his moment along fashion's cutting edge.

"I love a woman who loves to show off her curves, her figure, and most importantly, her skin," he said while showing off a dress. "As you can see in the back, it's a little bit of a peekaboo moment in the back happening as well."

There's no Oscar for casting, but Cindy Tolan's work on "West Side Story" proves there's no doubt the job is critical to the success of a movie.

The style cues adding up to a signature look.

"The LaQuan Smith woman is the center of attention," he said. "She represents femininity, sensuality, and all things glamour."

Glamour is definitely back in a big way, as the virtual fashion shows during the pandemic have given way to in-person events.

And nobody is happier about that than this native New Yorker. Remember the name: LaQuan Smith. Check to his designs, then wear them...if you dare.