LGBTQ+ pioneers Lisa Ben, Sir Lady Java, among those featured at ONE Archives 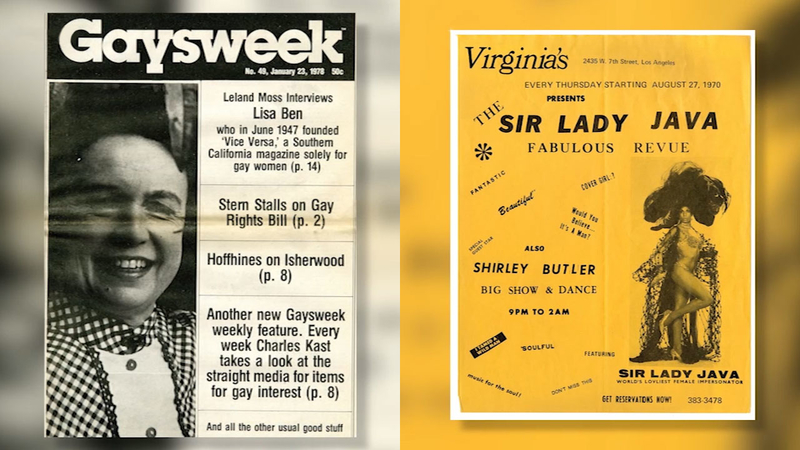 LGBTQ+ pioneers among those featured at ONE Archives at USC

In the ONE Archives at the USC Libraries, stories come to life.

"I remember when the guitar case came into the room, it was like a sacred object had come into the building," said Joseph Hawkins, director for the ONE Archives at the USC Libraries.

The guitar in reference was in a faux leopard case, lined with pink, and belonged to Edythe Eyde, born 1921 in San Francisco.

She made Los Angeles home, and built a community as a gay woman.

"On the one hand she didn't really call herself an activist, on the other she created this really groundbreaking publication," said ONE Archives Librarian, Loni Shibuyama.

"I think that allowed her some creativity to explore some different types of writing," said Shibuyama.

She grew popular for her 1947 magazine called Vice Versa, a free combination of editorials and short stories, with a modest circulation. Ben wrote it while working as a secretary for an executive.

That she did. Vice Versa is the first known lesbian publication in North America, one of many pieces of LGBT+ history kept by the ONE Archives Foundation, each resembling as much resilience as the people behind them.

"It was collected at a time when it was not even permitted to be collecting these materials," said Hawkins. "It was dangerous."

And in certain cases, illegal. Like the work of Sir Lady Java, a transgender performer and activist of color. She was shut down by the LAPD two years before Stonewall, when an ordinance banned crossdressing.

The rule was eventually overturned, and the world around both Sir Lady Java and Lisa Ben changed through the years, too.

But in 2015 came a reminder that Lisa Ben's momentum happened, as Lisa Ben. In her final years, Edythe Eyde moved into assisted living.

"And she was ill, and she was being cared for by caregivers who she was afraid to be out in front of, and so she went back into the closet," said Hawkins.

Eyde died at 94 years old while hiding her truth.

Her legacy formed in how she lived it.

Reference material coordinated in conjunction with the ONE Archives Foundation.

The ONE Archives Foundation is the independent community partner that supports ONE National Gay & Lesbian Archives at the University of Southern California (USC) Libraries, the largest repository of Lesbian, Gay, Bisexual, Transgender, Queer (LGBTQ) materials in the world. Founded in 1952 as ONE Inc., the publisher of ONE Magazine, ONE Archives Foundation is the oldest active LGBTQ organization in the United States. In 2010, ONE Archives Foundation deposited its vast collection of LGBTQ historical materials with the USC Libraries. Today, the organization is dedicated to promoting this important resource through diverse activities including educational initiatives, fundraising, and range of public programs.