Imani Lamarr had reservations about bringing her baby to class. How would he react? Would he be a distraction to other students?
WABC
By Beccah Hendrickson 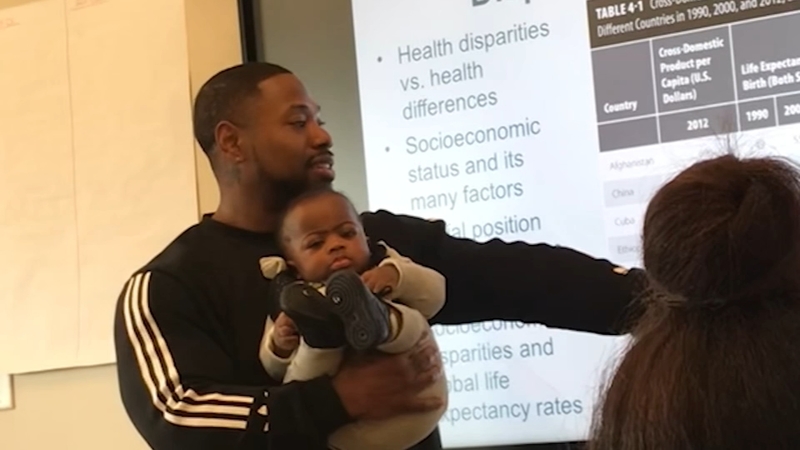 LINCOLN UNIVERSITY, Pennsylvania -- The story of how a Lincoln University college professor ended up holding a baby during class was life-changing for a 21-year-old student who was finally able to take notes.

"I've always wanted to go to an HBCU. So, I decided what's better than the first, so I chose Lincoln," said Imani Lamarr, who is now a senior at the Pennsylvania university.

Two years ago, she was taking a class with Dr. Aqeel Dix in the health sciences department.

She had just come back to school from taking a semester off after giving birth to her son prematurely. Lamarr's son had to spend months in the neonatal intensive care unit (NICU).

"It was really hard. Every day going to the hospital, seeing him and not being able to help him, it was hard," Lamarr recalled.

Christopher Murphy, who Lamarr had named for her father, had become her world and her schedule revolved around his.

When she told Dix she had to miss class because she couldn't find a babysitter, his answer was no.

"I'm not going to have one of my students miss my class because they have no one to watch their child. That's just not an option for me," said Dix.

Instead, he told her to bring her son to school.

"That's my character. I don't mind helping my students wherever they need me," he said.

Lamarr had reservations about bringing her baby to class. How would he react? Would he be a distraction to other students? Would she be able to focus? But when Dix started lecturing, something changed for Lamarr, she realized she could do this.

"I never thought that it would come to that, and to have somebody who's there for me...who really cares ... it meant a lot," she said.

Lamarr is now a few months from graduating and she has two of her favorite guys, her mentor, and her now healthy 2-year-old son to thank.

"You really don't understand how much this meant to me," she said.