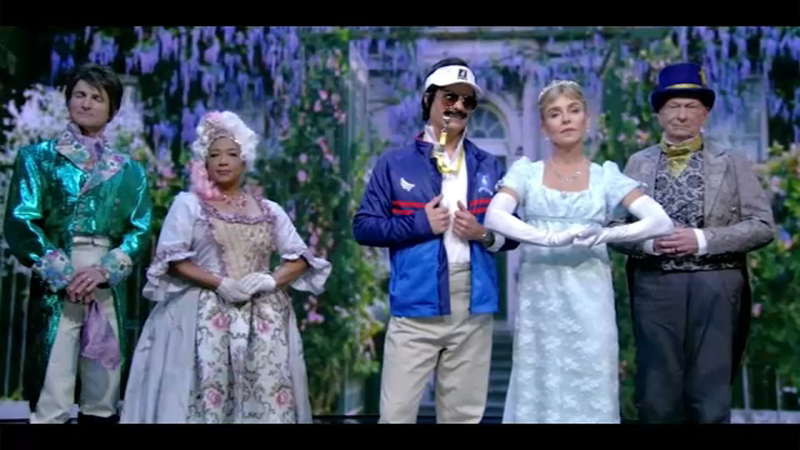 NEW YORK -- It's become a tradition on "Live With Kelly and Ryan" to dress up for Halloween, and in fact, many fans will tell you this is their favorite episode of the entire year.

Kelly Ripa and Ryan Seacrest went back to the future and into outer space for Halloween.

They stepped into a time machine and came out as The Jetsons, recreating a beloved cartoon popular in the 1960s, but that wasn't the only TV series spoofed here.

They even did a mash-up of "The Queen's Gambit" and "Squid Game."

They wore 40 costumes in all for a show that is put together piece by piece over the course of many days.

"I never know what this show was until I watch it backstage while we're changing," Kelly Ripa told Eyewitness News Entertainment Reporter Sandy Kenyon. "Then I'm like, 'Oh, that's what you wanted me to do?!' I never fully understand the concept."

The theme this year was "Out of This World," which was appropriate because as Ripa joked, "we've always been a bunch of space cadets around here and finally it's in vogue. It's cool now."

In years past, the "Live" audience has been packed with folks in very elaborate costumes, but not during a pandemic, when the audience had to join from home via Zoom.

"This day especially you miss the audience because they all come in their costumes," Seacrest said. "Now, we do get a chance to see them on screen, but it is incredible to see audience members great creativity when it comes to this day."

Executive Producer Michael Gelman dresses up to take part in the fun, and so does ABC 7 Vice President, Art Moore.