Back in the studio! Michael Gelman offers 'Live with Kelly and Ryan' preview 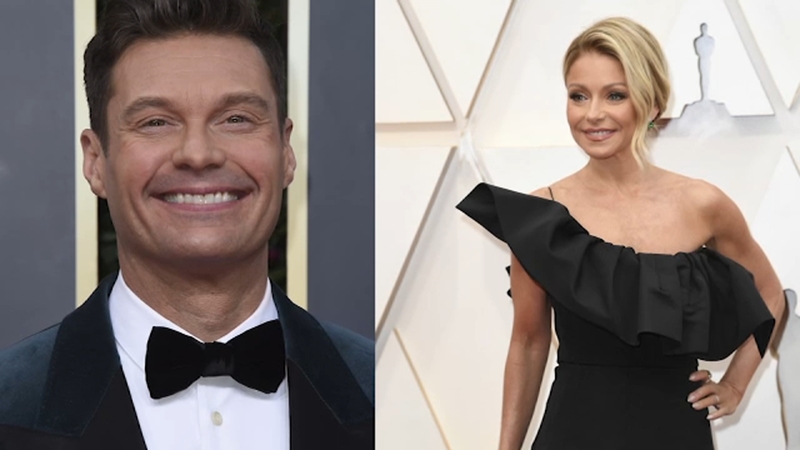 'Live with Kelly and Ryan' to debut new season in studio

NEW YORK -- "LIVE with Kelly and Ryan" debuted its new season on Labor Day with a backyard cookout, followed by the return of hosts Kelly Ripa and Ryan Seacrest to the show's New York City studio.

Season 33 kicked off September 7 with an outdoor show in the midst of the COVID-19 pandemic, but the hosts returned safely to the studio Tuesday after doing the show remotely and on separate coasts since March.

"Everyone will be wearing masks," longtime "Live" executive producer Michael Gelman said. "The hosts will be six feet apart at least. We're cutting down tremendously on the number of people in the studio. We're going to stay safe, but we'll at least be doing our jobs more like the old normal in the new normal."
EMBED More News Videos

But don't think that the fun will be left behind.

While there are no live audiences, Ripa and Seacrest are bringing their same hallmark warmth and entertainment to the show, which will be like a hybrid, with some guests in studio and others joining virtually.

Fans of the show know that Ripa and Seacrest are known as much for their energy as their fan interaction. Though the interaction can't physically happen, Gelman said it's something they held onto while the shows were remote and plan to continue doing when the hosts are back together in New York.

"We've figured out a way to connect with people," he said. "We've been talking to people at home and highlighting them. So it's been an interesting transition. It's still working for us, and I think it's going to be better once we're altogether in the same room so we can communicate and interact in a way that you just can't do on Zoom."

Gelman, who has the longest tenure at the helm of any of the top syndicated shows, says they thought about going the route of using crowd cutouts or even pumping in noise like some award shows and even sports. It was an idea the team toyed with even before the hosts left the studio, but while shows were being produced without a live audience at the start of the pandemic.

It didn't quite feel right at first, but it can't be ruled out.

"For me, it was feeling gratuitous just to have these people up there just to be like, 'Look! Here's our audience,'" he said. "It doesn't seem that engaging. But we may change things around and have some fun with some audience noises, crowd noises."

One popular segment that won't be going away is "Live's" daily trivia game and the trivia dancers. Instead of having people flex their skills in studio, a home version will be debuted, where people can send in their best dance videos.

"We're finding things like that into our inbox, and we're still highlighting a lot of people at home, different individuals and families every day... so we're not just isolated in the studio," Gelman explained.

Like many of us trying to get up and running with new work from home set ups, "Live" also faced challenges, especially because things happened so fast at the beginning of the pandemic.

"We really got it together quickly," he said. "Hats off to our whole technical team and everyone. We were able to figure out a way to get the show on the air digitally before anyone else. We didn't even miss one show...Here, we're using all our home equipment. The biggest challenge was the internet. Where Kelly and I are in New York, the internet has been terrible. So all of a sudden if we were doing taping too late in the day, a lot of people got on to do their school or their meetings, everything just slowed down."

Gelman explained that at the same time of day, between a five and 10 minute window, the internet would start breaking up, an issue many can relate to.

"People were very understanding and I think the shows were still good," he said. "I think you could still tune into us for real conversation. Something that's realistic, and we're talking about things going on but nothing too down and depressing."

A look at the teaser for the start of the season shows Ripa and Seacrest are definitely looking forward to bringing the sunshine. The teaser, set to "Sunday Best" by Texas natives Surfaces, shows the hosts getting ready for their return.

The pair returning "home" to New York will also align with the theme for the first month of the new season "Live @ Home." Topics will include do-it-yourself home improvement, cooking school (because we've all suddenly become great chefs in quarantine, right?), saving money, and self-care.

Gelman said the theme of "home" just made sense since that's where many people still are, whether they are working or helping their children learn virtually.

"We'd like to get our audience back in with us as soon as it's safe because we love seeing them in person for years," Gelman said. "Having that one on one connection is one that most broadcasters don't get. You're sending your signal out and you're not really feeling that interaction up close and personal."

In the meantime, "Live" is just happy to bring you joy.