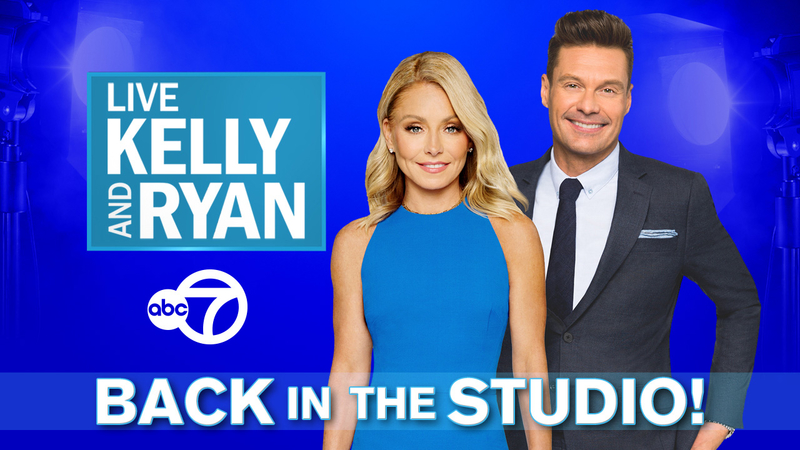 UPPER WEST SIDE, New York City (WABC) -- "Finally, finally!" -- That's how Kelly Ripa and Ryan Seacrest greeted each other when they reunited on the "Live with Kelly and Ryan" set after the better part of a half year apart due to the coronavirus pandemic.

They were back together in person on Monday for the season 33 premiere but stayed outside, while Tuesday marked their first time indoors after doing their show via video chat each day for the past five months.

It was hardly business as usual, though, as Kelly and Ryan still had to keep their distance from each other. They stayed separated by at least 6 feet, but they were brought together in a split screen effect that was, well, pretty effective.

Back in studio with new seating charts. Shout-out to everyone working behind-the-scenes to keep us safe and healthy. See you again tomorrow! @LiveKellyRyan pic.twitter.com/IMLk6aAEoR

Guess who’s back in the studio today? pic.twitter.com/8myhAgc6NM

The ongoing pandemic means no audience for now, and the seats will stay empty.

"The audience, of course, is the third co-host," said Ripa, who clearly misses having fans so close. "Keeping everybody safe is more important than having a boost to our egos, quite frankly."

Related: Back in the studio! Michael Gelman offers 'Live with Kelly and Ryan' preview

Their famous guests, like John Leguizamo, sit apart from them in another section of the same studio.
EMBED More News Videos

Still, it was clearly a relief for both hosts after so many shows produced remotely.

"Seeing Kelly in person and being away from he for so much, it was hard for me to listen to what we were both doing and saying because inside I was so excited," Seacrest said.

Rip said she never had a brother, but if she did, she would want him to be like Seacrest.

"We FaceTimed a lot over the pandemic, so it wasn't that much of a surprise to see him," she said. "But to see him and to not be able to hug him was the hard part. It was very hard."

This is the start of Kelly's 20th season on "Live," and it heads into the new season as the number one talk show in daytime.

"Everybody has come together as a staff to try and put out on the best show we could under the weirdest of circumstances," she said. "It's not always ideal. It's not always perfect."

She gives a lot of credit to the home audience for sticking with them.

With so many fans still at home, Kelly and Ryan will spend the rest of this month offering advice and 'how-to's.'

This first week is dedicated to home improvements, but for now, they are just happy to be back in their second home -- their studio.