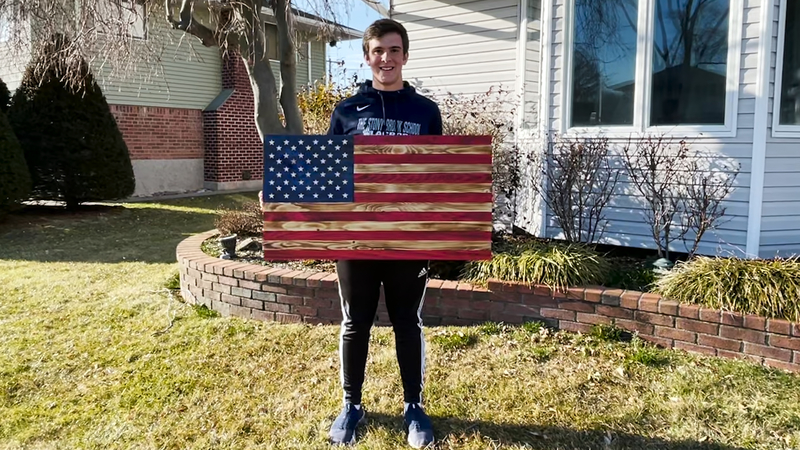 COMMACK, New York -- A 17-year-old Long Island boy is hard at work constructing wooden American flags that he wants to send to every member of Congress, hoping to spread a message of unity during a time of deep divisions.

The young artist, Bobby Reuter, has always liked to make things. During the pandemic, his mother suggested he take up a hobby to stay busy.

Reuter chose to construct wooden American flags. After all, the flag had always meant a lot to him. But it was not until his English class tasked him last year with writing about the symbology of the American flag that Old Glory took on a deeper meaning for him.

This passion soon turned into a business, Long Island Flags, when Reuter created his first flag. As soon as he posted his first one to social media, more and more customers wanted to find out how they could get their hands on one.

Related: Meet the teen chef sensation who's now a sous-chef at a Long Island restaurant

"I think symbols can do a lot for people as far as reminding them about a certain set of ideals," Reuter said. "I think things like freedom, justice, equality are so important. I think if we have a symbol of that, it shouldn't be forgotten."

Long Island Flags was thriving for Reuter, but he wanted to take his cause a step further with his Congressional Unity Campaign.

Reuter soon got the idea to send the flags to every member of Congress, but after the Jan. 6 insurrection on Capitol Hill, he felt a greater urgency to do that when he saw such division even in his own life. "I knew that I had to try something to try to remind people that we still had that common ground."

Reuter is determined to send a letter - written by hand - to each member of Congress, explaining his mission and determination to help restore unity back to the country with his wooden flags.

"I'm trying to write to every member of Congress, which is a few hundred, and offer them a free American flag with the hopes that it can spread a message of unity," said Reuter. "Once I started it, I knew it was a good thing, and I definitely wanted to do it."

That's how much he believes in the symbolic power of the American flag.

"People start to lose that value, towards the American flag," Reuter said. "I believe that whether we're getting closer to those ideals or straying away from them, the symbology of the American flag is unwavering, it's always there."