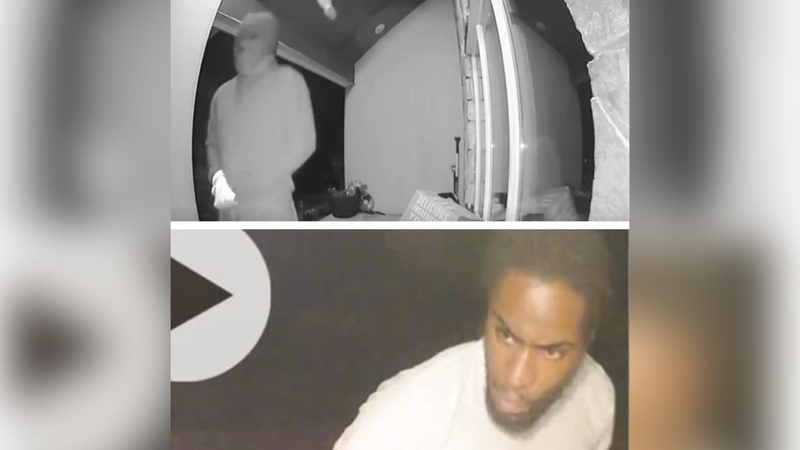 SHIRLEY, Suffolk County (WABC) -- A Long Island woman wants police to track down the man who broke into her house early Monday morning.

Alicia Sgambati, of Shirley, was able to catch video of the would-be burglar on her "Ring Doorbell" device.

"I want him caught," Sgambati said. "I was scared at first, and it turned into anger. I'm angry that this happened."

The video shows the man walking up to Sgambati's house on Pheasant Way around 1:05 a.m. with his T-shirt in his mouth. He appeared to check to see if the front door was unlocked, which it was.

About 20 minutes later, the suspect walked up again, this time wearing a ski mask and gloves. He propped open the front door, then walked away for a few minutes before returning to the home.

After he entered the house for a few seconds, Sgamabti's dogs began to bark, scaring him off.

"My husband and I shot out of bed," Sgambati said. "We run up here, we look out the windows, we don't see anything. We go out, we go check our cars."

Sgambati said she then remembered hearing the Ring Doorbell alert on her phone and was horrified when she pulled up the first video.

"I ran outside because my husband was still outside," Sgambati said. "As I'm running, I'm hitting the next video. And then to see this face in a ski mask coming at you, I still get chills. I still get choked up. You don't know what his intent was."

Sgambati said her children and elderly mother were also home at the time.

Another woman contacted Sgambati through the Ring Doorbell app, notifying her that the man also tried to break into her home an hour before. She lives about two to three miles away from Sgambati and also caught a clear picture of the suspect on her Ring Doorbell camera.

Sgambati said they both have turned over the videos to police, and she hopes the entire Shirley community will keep an eye out for him so he will be apprehended.

Suffolk County police are asking anyone who recognizes the man or who may have more videos of him to contact them at 1-800-220-TIPS.