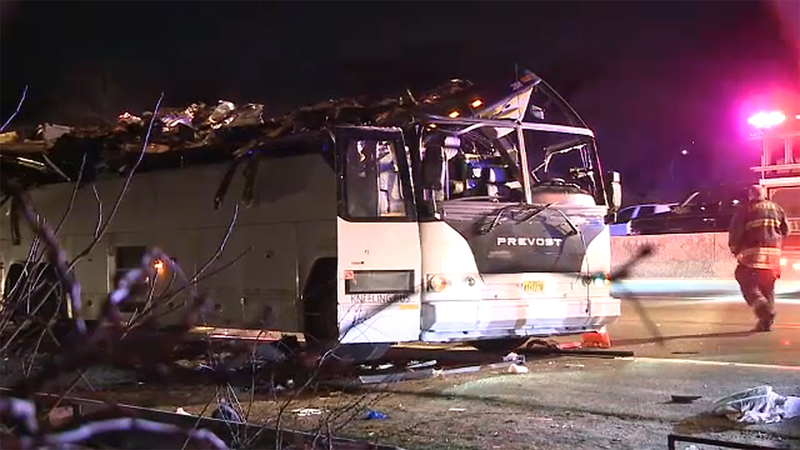 Top of bus sheared off in LI crash

The top of the bus was sheared off when it hit an overpass near Exit 19 in Lakeview just after 9 p.m.

Two victims, both 17-year-old females, were seriously injured and remain in the hospital. The driver and 43 other passengers on board were taken to several area hospitals, where they were treated and released.

Reporter Kristen Thorne has the latest on the crash.

In a statement, the company told Eyewitness News, "We're not making any comments at the moment. Our greatest concern is for is for the passengers and their families."

In cell phone video, 16-year-old Dominick Stanley can be heard yelling for his friends to get off the bus.

"All of a sudden, the roof caved in," he said. "There's pieces flying everywhere and I put my hands up..and got all cuts and bruises on my hands."

Police say that driver, 43-year-old Troy Gaston, of Bethlehem, Pennsylvania, expressed remorse over the accident. He did possess a valid Pennsylvania commercial vehicle driver's license, but police said he was using a non-commercial GPS that may have played a factor.

"It was a stand-alone GPS that you would buy from a department store," New York State Police Major David C. Candelaria said.

The driver's planned GPS route was via the Belt and Southern State parkways. He did not have any alcohol in his system, investigators said. A drug evaluation is pending. Gaston did voluntarily provide a blood sample, police said.
EMBED More News Videos

Danielle Leigh has the latest on the horrific bus accident on Long Island's Southern State Parkway.

State police will also conduct a comprehensive vehicle examination to rule out any mechanical issues. Being from out of the area, Gaston simply was not aware of the parkway system and the lower overpasses, police said.

"He made it all the way through," Cadelaria said. "We're very lucky. This could have been tragic."

The minimum clearance on the parkway is 7 feet, 10 inches, and accidents involving vehicles striking overpasses are not uncommon on the parkway. In 2017, there were reports that an electronic alarm system would be installed on the parkway to warn drivers of vehicles too high for the overpass.

The devices were recently installed near the site of the wreck but were still being tested, Department of Transportation spokesman Joseph Morrissey said.

"If you're not from the area, you need to know how to maneuver around the area," one driver said. "I don't understand how he did not know, or he didn't measure it, or he didn't have a tour guide."

Many of the Suffolk County students attend Huntington High School. It was not a school-sanctioned field trip. In a statement, the superintendent expressed his thoughts and prayers:

"While injuries apparently ranged in severity, preliminary reports indicate that all have been treated and released, or remain under treatment. Our thoughts and prayers remain with all families involved. Student support staff remain on hand at Huntington High School for those in need."

The New York State Police are asking anyone who witnessed the collision to please contact 631-756-3300. 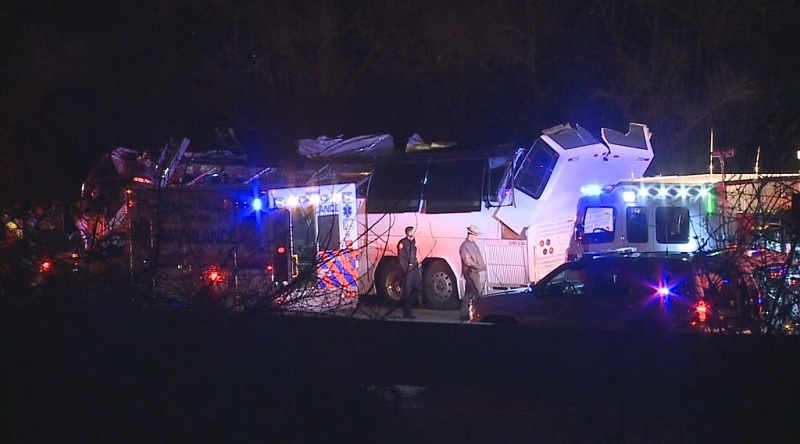