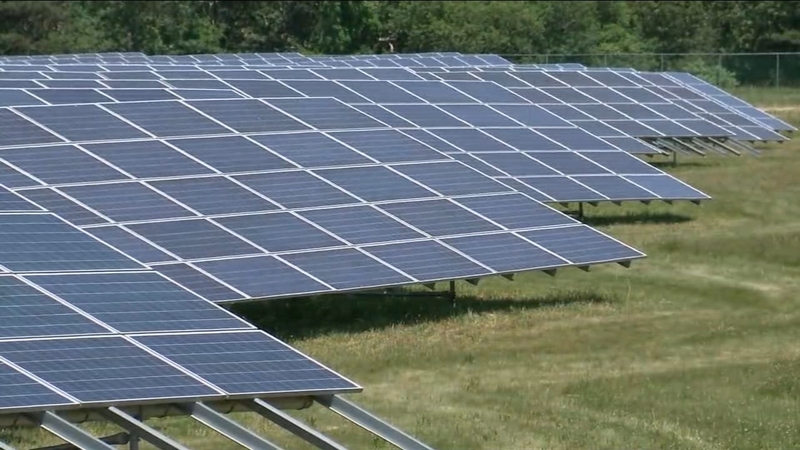 CALVERTON, Long Island (WABC) -- In the next few years, Calverton on the East End of Long Island is planned to be home to 788 acres of solar panel farms, which is being praised by some, but is concerning to others.

"We just want to pump the breaks," said Toqui Terchun with the Greater Calverton Civic Association, for example.

The three solar farms already built in Calverton total 168 acres. The first was constructed in 2015. Three more projects are in the pipeline, totaling 620 acres. The solar energy is put into the overall grid for PSEG Long Island.

"The land that we're concerned about has much better usage," Terchun said. "Why do ground solar on it?"

Dean Del Prete, the owner of Cousins Paintball, has until June 30 to vacate the property in Calverton. His landlord sold the 80-acre property to solar energy company, NextEra.

"It's been really stressful couple of weeks," Del Prete said.

Del Prete said officials in the Town of Riverhead are trying to help him find a new property.

All of the properties being turned into solar farms in Calverton are zoned as industrial, meaning solar farms are well within the scope of a legally acceptable development, although some worry about the environmental impacts.

The mini golf course will also be destroyed to make room for the solar farm.

The various solar companies have given millions of dollars to the Town of Riverhead and its schools. The companies do not pay property taxes.

In a phone conversation, Town of Riverhead Supervisor Yvette Aguiar told Eyewitness News reporter Kristin Thorne that the 197-acre solar farm, which will go where Del Prete's business currently sits, will generate $33 million for the town and its schools.

Eyewitness News requested an on-camera interview with Aguiar on Friday, but her secretary said Aguiar was too busy to accommodate our interview request.

A spokesperson for AES, which operates two solar farms in Calverton and has plans for two more, said AES is a strong community partner with Calverton.

"AES has provided more than $5.5 million to the local Riverhead community since 2015," Michael Farrell said in a statement to Eyewitness News.

Farrell said AES has participated in outreach ranging from COVID-19 relief for the Peconic Bay Medical Center to support for community events, such as Art in the Park and the Riverhead Cardboard Boat Races.

"We look forward to continuing to be a strong community partner as we continue to operate in the Riverhead area," he said.

Farrell said one of AES's solar panel construction projects is slated for 132 acres at the intersection of Middle Country Road and Edwards Avenue.

Farrell said construction could begin by the end of 2021 with the solar panels being operational by the fall of 2022.

Officials in the Town of Riverhead have been discussing instituting a moratorium on solar panel farms.

Terchun encouraged residents to educate themselves on the installations.

"Take a look around," she said. "Get educated on it, learn about how they like their Calverton community to be shaped."

According to the Solar Foundation, New York State has the third-highest amount of solar jobs in the country, totaling more than 10,0000 jobs.

For Long Island beach lovers, cabana season is officially upon us.