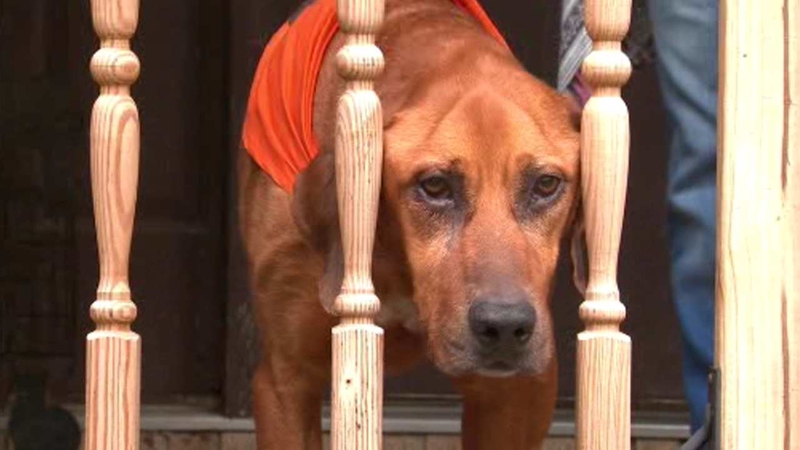 HOWELL, New Jersey (WABC) -- It was a long journey home for a kidnapped dog.

Two years after she was stolen from a home on Long Island, the unthinkable happened.

She was found, on the edge of death, nearly 200 miles away in New Jersey.

"She was skin and bones," said Anita Innamorata Stout, rescuer.

That's how Cali, a Ridgeless Rhodesian Ridgeback, came to the Broken Promises Sanctuary in Howell, New Jersey on April 1st.

The people who found her at a turnpike rest stop thought she'd been hit by a car. Stout rushed her to the vet for help.

"Unfortunately, you can tell she had been mistreated or on her own for a while. She was very sweet, she pretty much just let us do whatever we needed to do with her," said Dr. Mary Qwacz, veterinarian.

Dr. Qwacz was able to stabilize her and also found out she had a microchip.

Stout made the call to the owner, Brittney di Bartolo about her dog Cali.

"I just dropped to my knees and was in tears," di Bartolo said.

Last year, she moved with her family to Raleigh, North Carolina along with Cali's brother Dallas.

Di Bartolo was horrified to hear Cali was emaciated, but then the news turned worse.

She was given a week to live because of nasal cancer.

But Stout pledged to help Cali fight, a dog she believes had been stolen from the di Bartolos and mistreated.

"We're called Broken Promises because people break their promises to animals, that's why we have a sanctuary. But we also keep our promises to our animals, so it's a promise being kept for her," Stout said.

After three treatments at Veterinary Cyber Knife, doctors believe Cali now has been given as many as 18 months to live.