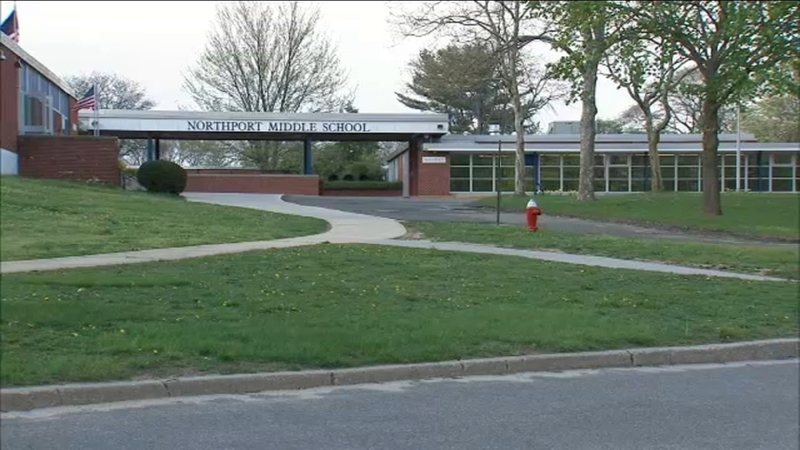 NORTHPORT, Long Island (WABC) -- Community members with an interest in environmental concerns that have plagued a middle school in Suffolk County got a chance to ask questions of environmental consultants hired to assess the safety of Northport Middle School during a virtual meeting that lasted roughly three hours Thursday evening.

The meeting followed the release of a nearly 7,000-page report from P.W. Grosser Consulting, Inc. that documented a months-long investigation into potential contaminants at the school and explored the impact of historical environmental concerns in the area.

Northport Middle School has been closed since before the pandemic began following the discovery of elevated levels of mercury in the school septic system in January.

That discovery followed repeated complaints about sickening odors at the school, the 2017 discovery of chemicals improperly stored in a storage area below classrooms, and a documented instance in the early 2000s of improper dumping of chemicals into the school septic system.

"We really wanted to take a comprehensive and thorough vetting of this entire process so that we can say here is everything we know," said Superintendent Robert Banzer.

Thursday night, parents largely sought for clarity about the scope of the firm's investigation and the safety of the school.

The investigation identified arsenic in the school track, benzene in an art room, carbon monoxide in the building associated with buses leaving the on-site bus depot, problems with the seals and covers in the school sanitary system and drainage issues in the building, all of which consultants believed could be corrected.

"PWGC has not identified an environmental concern that renders the school unsafe to occupy. While several items of concern were identified during the investigation, each is addressable and does not require the school to be closed to implement," read PWGC's report.

Consultants made recommendations to better seal the sanitary system, remove gas tanks from the school and to store district school buses elsewhere, to evaluate the supplies in the art room and remove anything potentially problematic, and to come up with a plan to address drainage issues in the building and prevent student exposure to arsenic in the track.

"If the recommendations are followed, we don't believe there is a cause for concern," said PWGC Senior Project Manager Jennifer Lewis.

Superintendent Robert Banzer indicated the district is committed to making those corrections.

The report also acknowledged that many items of concern were already corrected by the district before the report was finalized and released.

"We have done a lot," Banzer said. "We have taken this extremely seriously and we are going to continue to do that."

Many parents wondered if the concerns PWGC did identify indicated that past environmental hazards at the school could have been to blame for ailments their children faced.

"We can't say in the past this wasn't making them sick," said PWGC Project Manager Heather Moran-Botta. "We can't recreate the past."

At the same time, Moran-Botta said based on the investigation's findings, she is confident the school is safe in its present condition.

"We can only say based on what we were seeing now the building is safe for occupancy," Moran-Botta said.

Parents who have long expressed concerns about the school told Eyewitness News they continue to have some questions about the conditions at the campus but they are reassured by PWGC's recommendations and the district's apparent willingness to implement those corrections.