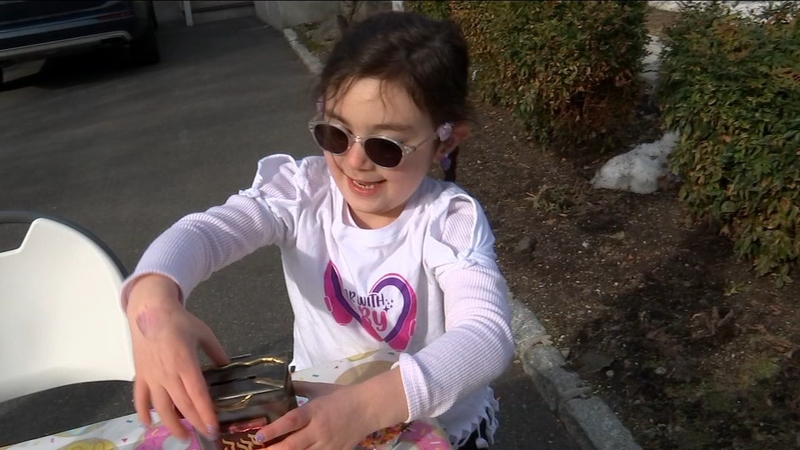 PORT WASHINGTON, Long Island (WABC) -- The family of a four-year-old girl from Port Washington who has hearing loss is helping a young boy in Honduras get new hearing aids after connecting with his mother over Facebook.

Ruby Ganci's parents discovered their daughter's hearing loss at the beginning of the pandemic.

"As everyone started putting masks on she would say things like, 'Move your mask. I can't hear what you're saying,'" said Lindsay Ganci, Ruby's mother.

Ruby got hearing aids last May.

Shortly after, the family started a foundation called Hear with Ruby to help children with hearing loss.

Earlier this week, Lindsay Ganci was reading through a Facebook group for parents of children with hearing loss and saw a post by a woman in Honduras who was trying to find a pair of used hearing aids for her son.

Iris Gomez Valle's six-year-old son, Nathan, has hearing loss as a result of complications during birth.

"We started noticing when he was three years old that he wasn't talking," Valle told Eyewitness News reporter Kristin Thorne. "He seemed lost, like, in his own world."

Valle said a month ago Nathan's used hearing aids stopped working. She can't afford a new pair as she is currently in medical school. A properly fitted pair for Nathan would cost approximately $3,200. Valle turned to the Facebook group.

"I reached out to Iris and said, 'Can I help? What do you need? We don't have a ton of money raised, but we do have a few hundreds dollars,'" Ganci said.

In just a few days, Ganci was able to raise $2,000 and on Friday the family held a bake sale outside their home in Port Washington. Several local businesses donated baked goods.

"This is an amazing town of people who care," Ganci said.

Ganci also put Valle in touch with Ruby's audiologist who is helping make sure Nathan gets the proper set of hearing aids.

Valle said she is grateful to Ganci.

"I received this act of kindness from someone that doesn't even know me. She understood my struggle," Valle said.

Ruby understands she is helping Nathan. The two have met over a Facebook video chat.